There are calls for more to be done to save tōtara trees in the Raukumara Conservation Park from being wiped out by pests. 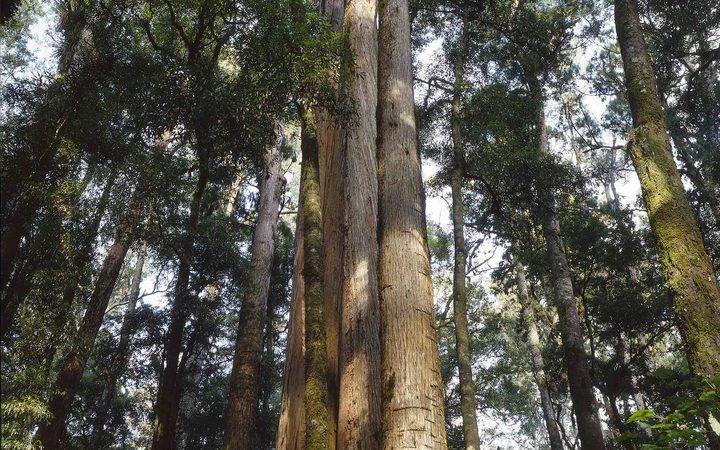 Possum and deer are killing the ancient native trees and are also causing a decline in the numbers of other native plants and animals in the forest.

The Raukumara Conservation Park spans 110,000ha across the East Coast of the North Island and consists of dense, isolated and uncompromising terrain.

It has proven to be the perfect breeding ground for possum, deer and red goats which are causing major damage to the forest ecosystem.

Department of Conservation (DOC) biodiversity ranger Graeme Atkins said on a recent visit to a coastal section of the forest he struggled to find any tōtara that were alive.

"[We] probably walked past a couple of hundred dead tōtara and we probably only counted three or four that were alive just hanging in there."

Mr Atkins has worked in the ranges for 23 years and has seen the effect of pests, such as deer, which destroy undergrowth in the forest.

"The Raukumara to me was always like a refuge for things like kiwi, blue duck, kākā, kākāriki all those native frogs and bats."

Each year DOC spends around $250,000 on pest control on red deer and in the Raukumara - but no money on possum control.

The last aerial 1080 operation in the Gisborne/Tairāwhiti area was 20 years ago and covered 9000ha around Mount Hikurangi.

She said in the Ngāti Porou settlement the Raukumara Forest was not one of the sites handed back to the iwi.

However, Ms Warmenhoven said the iwi wanted to work alongside DOC to stop the decimation of the Raukumara's tōtara trees and resources.

Botanist Philip Simpson wrote the book Tōtara: A Natural and Cultural History has seen first hand the damage caused by possums on tōtara across the country.

"They have eliminated countless thousands of trees throughout the mountainous part of New Zealand."

Mr Simpson said it was vital to fight pests in the battle to keep tōtara alive.

"Millions and millions of trees that were harvested all over the country for the developing of the nation of NZ - we owe tōtara a lot and we should be very concerned about [their] conservation."

DOC said at this time no decision has been made on what specific action would be taken on the impact of pests on tōtara in the Raukumara forest.

Tōtara can live to be more than 1000 years old, and are second in size only to kauri - which faces its own battle for survival from kauri dieback disease.