The first known dog to serve this country in war will be honoured at a ceremony at the National Army Museum in Waiouru today. 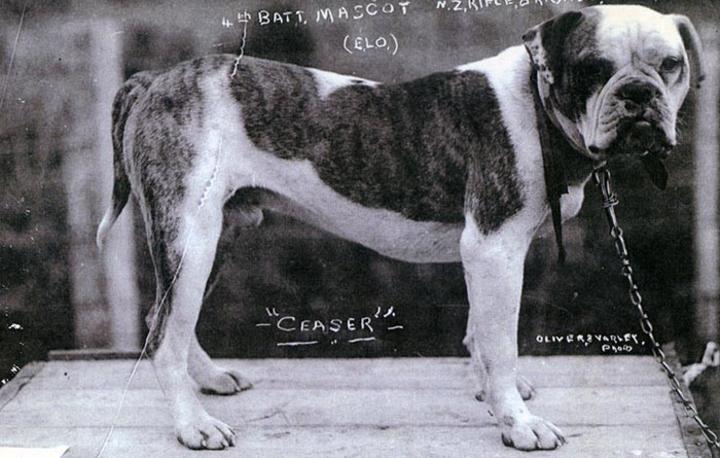 Ceaser, a bulldog, will be posthumously awarded the Blue Cross medal for service and bravery during World War One.

Ceaser started out as the official mascot of A Company, 4th Battalion, New Zealand Rifle Brigade during the war.

He is New Zealand's first recipient of the Blue Cross medal, which will now become an annual award.

Ceaser left this country with his handler, Rifleman Thomas Tooman, in February 1916.

They first went to Egypt where Thomas trained as an ambulance driver and Ceaser became a Red Cross dog.

After intensive training they both arrived on the Western Front in France at the Somme.

The director of the army museum, Windsor Jones, said Ceaser was trained to go out onto the battlefield to identify and help wounded allied servicemen.

The dog carried a satchel on his back which contained some writing paper and bandages.

"If the person was not too badly wounded, he could bandage his wounds and actually write a note that Ceaser could take back behind the lines to say where his position was and if there were any enemy snipers in the area."

"He dug an air-hole so the trapped man could breath, so he got aid to him and saved that man's life."

Dogs like Ceaser were trained to tell the difference between allied and enemy soldiers.

Just how is a little bit of a mystery.

Mr Jones said it could have been colour or the type of cloth used in uniforms.

"I am not too sure how they would have done that, but by all accounts it did happen."

Ceaser unfortunately came to a tragic end about two or three weeks after arriving on the Western Front.

"Unfortunately, he was shot by a sniper," Mr Jones said.

"He was found by Tom the following day because he hadn't come back."

The dog was found next to a soldier he had tried to save.

"And the sad thing is the man's hand was on Ceaser's head as if almost he was patting him, so probably a little bit of comfortable for both."

Mr Windsor said there were about 10,000 Red Cross dogs which served during World War One.

Patricia Stroud's is Mr Tooman's great-niece. She wrote a children's book about Ceaser and Tom.

"He was shattered when Ceaser died.

"They would have looked after each other in the trenches and on the battlefield."

She said the idea of awarding Ceaser a medal was wonderful.

"I know he was only a dog but he was a very loved dog and he helped the men get through a terrible time."

The spelling of the dog's name, Ceaser, instead of Caesar, has many intrigued.

Windsor Jones said it was possible Mr Tooman did not know how to spell Caesar. Or it may have been deliberate.

"We are keeping with the misspelling on the Blue Cross medal and display at the museum."

Recently the working dog kennels at Linton Military Camp were named after Ceaser.

Patricia Stroud said it was a very popular name at the time because the King, Edward the 7th, had a little terrier called Caesar.

Nigel Allsopp is the Australia and New Zealand representative for the United Kingdom-based Blue Cross organisation.

He said there were an estimated 18,000 dogs used officially by allied forces during the World World One.

"The medal is a way of formally recognising their service to man and to this nation."