Wasp numbers are increasing dramatically in Auckland and experts are warning the populations could climb higher if they are not controlled. 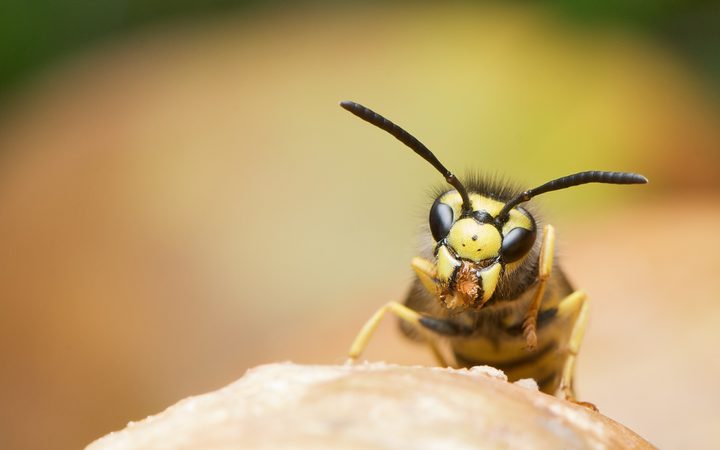 Auckland Council has received more calls from people reporting wasps so far this year than during the whole of 2018.

In Auckland, parts of the Waitākere Ranges can become no-go zones for rangers when wasps are at their peak.

The Council has fielded 349 calls about wasps so far this year, with almost half reporting nests. Already that's more than the 290 calls the council received last year.

Council biosecurity advisor and entomologist Emma Edney-Browne said this is peak season for common wasps, including paper wasps and yellow jackets, and last year's warm, dry spring and summer laid the groundwork for them to flourish.

"I do happen to see them everywhere but I don't know if that's because I'm keeping my eye out because that's what I do. But I'm definitely noticing a lot more particularly with the warm dry weather we've had this year," she said.

"Early in the wasp's lifecycle they're looking for sugary substances, this is where they're out competing with our native species for things like honeydew or nectar, so they'll completely devour nectar sources."

A group formed to take the sting out of these invaders, the Wasp Tactical Group, is working with the National Science Challenge to lower the country's out-of-control wasp population.

The group includes experts from universities and crown institutes, iwi, regional councils and the Department of Conservation.

Phil Lester is among the experts concerned about wasps' preying on indigenous species.

"The group recognises that wasps are a considerable problem throughout New Zealand. Certainly that's the case in places like Nelson where we have the highest wasp densities in the world, we have up to 40 nests per hectare in those regions where there's honeydew beach forest," Dr Lester said.

He said in Auckland's Waitākere Ranges, the wasp population can get so dense that park rangers are banned from entering due to the danger.

Dr Lester said wasps were cunning predators, and posed a danger to apiculture.

"They might target one particular hive within an apiary and have an all out assault on it. They assemble at the entrance, they'll kill the adult workers the guards that are trying to block the wasps from entering it. Then they raid the hive, kill all the larvae and eat the honey. They've got a sweet tooth just like you and me."

He said biocontrol was the best option for reducing wasp numbers.

"There are other species that raid wasps nests and eat larvae or attach wasps. Can we bring some of those into New Zealand and release them and go from there?

"The status of that at the moment is there's been quite a bit of collection done overseas and some of those have been imported into quarantine facilities in New Zealand but we're a long way off releasing anything, or rearing them to numbers where we could release them."

Landcare researcher and entomologist Bob Brown is also part of the Wasp Tactical Group, and he works in a team that is searching for predators to attack the common wasp.

Dr Brown has been travelling to England, where the wasps introduced here originally hail from, and has brought back a species of hoverfly under quarantine, to test how good they are at raiding wasp nests in the lab.

He said these hoverflies had good potential as effective predators to keep the wasp population down.

"We did genetic studies and looked at where these wasps in New Zealand came from. It ended up being the South of England, so I went to England and surveyed a bunch of nests there and found a lot of promising agents. That's what I've been working on lately."

Dr Brown found a species of hoverfly that in the lab appears to be a good candidate as a predator of wasps in New Zealand.

Dr Brown said the Landcare team is a few months away from seeking the Environment Protection Authority's permission to release an army of hover flies to attack wasp nests.

If the green light is given, it could take at least a year to release the critters.

Even so, he said it is one of many tools that needed to be used to reduce the wasp population.

"Biocontrol isn't an eradication control, it's a population control so it'll keep the population down but it's not going to eradicate wasps forever. That's an important component of what we're doing," said Dr Brown.