The state science company Landcare Research has been given $430,000 in taxpayer funding through the primary industries ministry, and $150,000 from other sources to investigate ways to use the mite to control exotic wasps.

The two most serious wasp species beat up bees and raid their hives, and steal foods such as beech forest honeydew from native birds.

Landcare researcher Ronny Groenteman says the mite - which may be new to science - was found during laboratory tests to the mites damage the host populations in nests or exotic wasps. 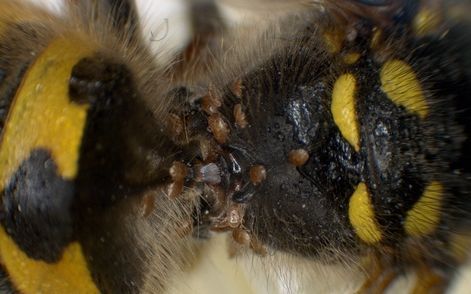 She says the wasps become infested by the mite and develop wing deformities.

An Auckland University scientist discovered the mites during a study of the chemical ecology of European wasps.

The mites appeared to attach to wasps with their mouthparts and were located in areas difficult for the wasps to groom.

The scientists are investigating whether the mites pose a threat to honey bees, bumble bees, native ants or native solitary bees.

Some earlier wasp biocontrol agents introduced to New Zealand 30 years ago failed to establish, but the Landcare scientists are looking at whether the "new" mites can build up to densities in the wild that lead to colony collapse in feral wasp nests.