The United Nations Secretary-General Antonio Guterres has this morning met with New Zealand youth leaders who have been working to prevent climate change. 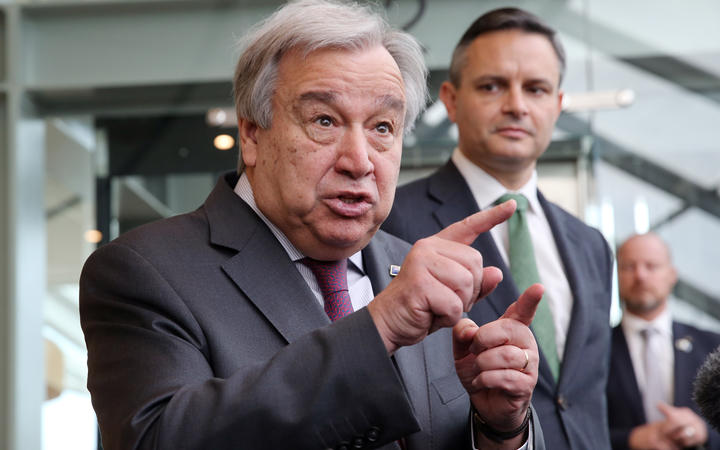 Mr Guterres is spending two days in New Zealand during his tour of the Pacific region.

He met with Climate Change Minister James Shaw and young activists at the Auckland War Memorial Museum for breakfast and laid out the message he wanted to send governments around the world.

"First, shift taxes from salaries to carbon. We must tax pollution not people. Second, stop subsidies to fossil fuels; taxpayers' money must not be used to boost hurricanes, to spread droughts and heatwaves or to melt glaciers," Mr Guterres said.

"Finally, stop the construction of new coal plants by 2020. We want a green economy not a grey economy in the world."

Mr Guterres praised the leadership that New Zealand and its young people had shown in tackling climate change.

"Governments are still afraid to move forward. They hear the costs of climate action, forgetting that the costs of inaction are much bigger."

Yesterday, Mr Guterres met with Prime Minister Jacinda Ardern, before she left last night for a summit in Paris to crack down on social media being used for terrorism.

He said the government's recently released climate change objectives were in line with what the global scientific community saw as "essential".

"I don't think there is any other region but the pacific with the moral authority to tell the world that the world needs to abide by what the scientific community is telling us."

The government's Climate Change Response (Zero Carbon) Amendment Bill aims to limit global warming to no more than 1.5C and to build a country and economy that can cope with the changing climate.

Mr Guterres, who has visited a Muslim country during ramadan every year since working as UN High Commissioner for Refugees, chose to visit Christchurch this year to pay tribute to the community's courage and resilience after the 15 March terror attack.

He will meet with Pasifika community organisations and NGOs in Mangere later today before giving a will give a lecture at the Auckland University of Technology, and will be in Christchurch tomorrow.