About 50 family members gathered at the entrance to Pike River mine today, the first time they had made the trip up to the portal. 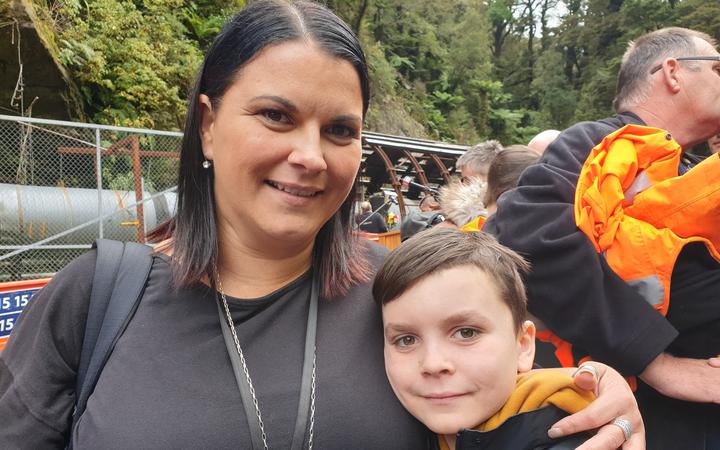 Cloe Nieper, whose husband Kane died in the mine in 2010. She and their son Kalani, visited the portal for the first time today. Photo: RNZ / Conan Young

The group gathered to hear a technical explanation for a delay of today's planned expedition into the mine, which exploded in 2010 leaving 29 men dead.

Among them was Cloe Nieper - whose husband Kane died in the mine - and her son 10-year-old Kalani, who was only 16 months old when the blast happened.

Mrs Nieper said it was important for them to be there, and she couldn't wait for a team to re-enter the mine and find out why it exploded.

She said life without her husband had been tough.

"It has been really hard to be a single Mum and have to deal with my emotions as well as him as he's been growing up and trying to deal with what's happened and trying to explain to him, even though he seems to know more than me half the time."

At this point Kalani chips in, reminding his mother he knows more than her most of the time.

Like his mother, Kalani wants the re-entry to happen as soon as possible so they can get some answers over why the mine exploded.

"Finally knowing like, fully, evidence to actually, like, end this ... what I'm saying is we need somebody to blame otherwise it's just chaos."

Faulty tube believed to be at fault over oxygen readings

The cause of the delay in re-entering the Pike River mine is now believed to most likely be a split in a vital piece of equipment.

A plan to re-enter the mine in the search for clues as to why it exploded and for any of the 29 men still inside, was called off at the eleventh hour after heightened levels of oxygen were detected inside.

There was a risk this could cause the coal inside to combust.

Today the Pike River Recovery Agency's Dinghy Pattinson told a gathering at the mine entrance, including about 50 family members, that a split in a tube bundling system used to monitor the mine's atmosphere, was most likely sucking oxygen in to the entry tunnel.

Mr Pattinson said a new tube system was now being used to monitor the mine and this was not resulting in any extra oxygen being drawn inside.

"They're reading different so we're just doing some more testing over the next few days to make sure we're confident with that but [I have] every confidence that it's a tube fault."

The faulty tube was possibly laid up to eight years ago.

RNZ asked Mr Pattinson if it would have been prudent to lay a new system from the start, rather than rely on one that was so old.

Mr Pattinson said further testing would be required before the mine was declared safe to re-enter.

He declined to put a timeframe on this saying to do so would put unwanted pressure on those doing the work.