Primary and secondary teachers will vote next week on whether to join forces and hold a joint strike at the end of this month.

Teachers pay talks have been stalled for months as the government insists there is no more money on top of the $1.2 billion over four years it has already put on the table. Photo: RNZ / John Gerritsen

Both groups have refused to settle for three pay rises of three percent each and their talks with the Education Ministry have been deadlocked for months.

The government has insisted that it will not increase the total value of its offers to the unions, which it said was more than $1.2 billion over four years, and would only rearrange how the money might be applied to pay rises and staff claims.

However, the Educational Institute (NZEI) and the Post Primary Teachers Association (PPTA) said combined industrial action on 29 May would give them more strength.

The NZEI said it would hold paid union meetings next week for primary and intermediate school teachers and principals, while the PPTA would hold an online ballot for its members.

The NZEI president, Lynda Stewart, said the union had been in collective agreement negotiations with the ministry this week but they had not resulted in a better offer.

"We really hoped we could bring something new from the government back to members next week, but they have made it clear they aren't willing to move on the overall cost of the package our members rejected last term," she said. 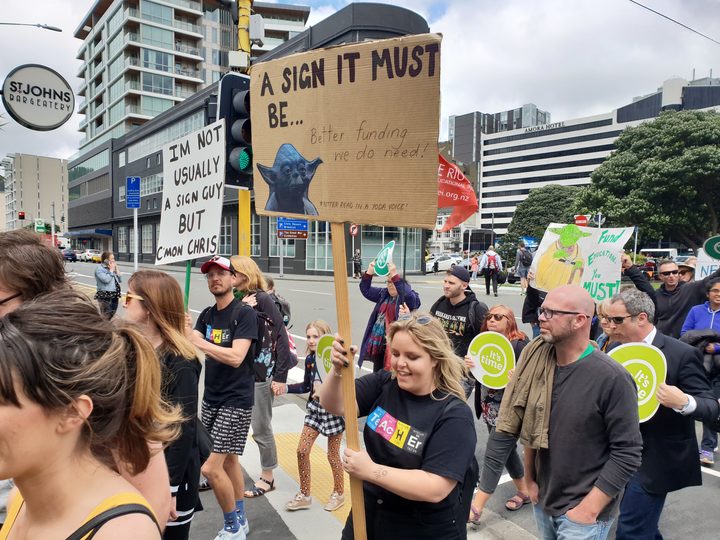 Primary teachers and principals in Wellington hold a rally on the last day of a week of strike action around the country last November. Photo: RNZ / John Gerritsen

The secondary teachers' union has not yet taken industrial action over its collective agreement claim, but NZEI members have, with more than 70 percent of primary and intermediate teachers and principals participating in strikes in August and November last year.

The Education Ministry's deputy secretary for early learning and student achievement, Ellen MacGregor-Reid, said the threat of a strike was disruptive and did not offer a solution to the negotiations.

Ms MacGregor-Reid said the ministry's offer would give about 24,000 teachers a pay rise of about $10,000 within 24 months of signing.

The NZEI entered negotiations claiming a pay rise of 16 percent over two years while the PPTA asked for 15 percent over one year. The unions have refused to say what pay rise they would settle for, but the ministry said the total cost of their original claims would be nearly $4 billion over four years.

The Employment Relations Authority last year described the NZEI's claim as unrealistic and said it should accept the ministry's offer.