Windy weather battering the east coast of the country today will ease before restarting this afternoon. 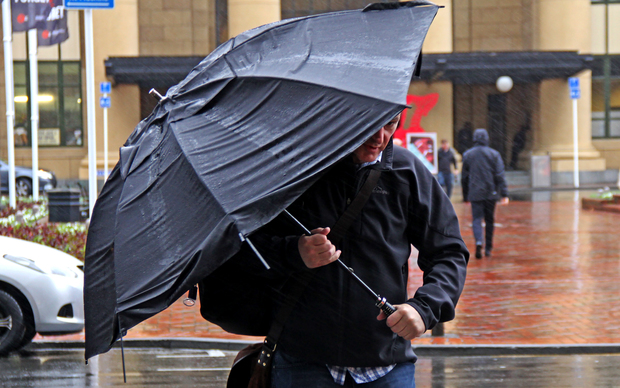 The area between Canterbury and southern Wairarapa can expect wind gusts of about 85km/h.

He said the wind would die down, but pick up again later on.

"It depends a little bit on where you are - in Wellington it's quite gusty now but that's gonna ease off a bit as the first front moves away ... calm before the storm if you will."

"Once the initial front moves away there will be a brief easing before the next set of winds come in."

He said Canterbury was already experiencing the eased of winds.

"If you're in the north, the main weather's coming through now, early afternoon is when we see it ease and then evening is when the southerlies kick back in again.

"But down south that ease is already passing and the southerlies have started making their way up."

Mr McInnes said the wind gusts were not forecast to coincide with high tide.

A strong wind watch is in place for coastal Marlborough, especially the Kaikōura Coast, Wellington and Wairarapa from 5pm onwards till the early hours of Tuesday.

For coastal Canterbury, Christchurch and Banks Peninsula, south to southwest winds are expected to get strong from midday till about 9pm.

In higher parts of Banks Peninsula, winds may approach severe gale in exposed places during this time.

Additionally, the front that brought heavy rain to the west of the South Island has now moved north, the MetService said.

While showers are still expected until late this afternoon, the heavy rain warning for Westland, Buller and the Canterbury headwaters has been lifted.

For Porters Pass, about 3cm to 6cm snow is likely to settle near the summit between 1pm and 6pm today and with lesser amounts down to 700m.

For Lindis Pass, sleet or snow showers are expected until mid-afternoon, with 1cm to 2cm possibly settling near the summit.

For Crown Range Road, sleet or snow showers are possible near the summit until 1pm but little if any is expected to settle on the road.

No snow is expected about the Milford Road.