A senior doctors' union is accusing district health boards of spreading lies and trying to divide the health workforce. 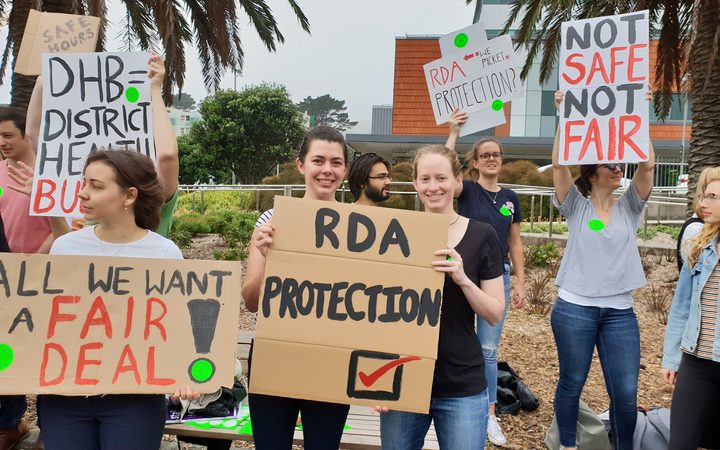 Junior doctors are due to begin their their longest ever strike tomorrow. Apart from those in Canterbury, they will walk off the job for five days. Photo: RNZ / Karen Brown

The Association of Salaried Medical Specialists said that the boards are claiming that a junior doctors' union, the Resident Doctors' Association is the only one able to control some of its members' working conditions.

The association's executive director, Ian Powell, said his union has also negotiated a similar clause in its collective agreement with DHBs.

He said that by spreading misinformation, the DHBs were aggravating the situation.

Such statements were an attempt to isolate junior doctors and divide the workforce, Mr Powell said.

Members of the Resident Doctors' Association will begin a five-day strike tomorrow because of proposed changes to their employment contract.

Canterbury doctors have been excluded from the industrial action because of the recent terror attacks.

The main sticking point is that DHBs want hospital chief executives to have the final say over working arrangements - including rosters - rather than the union head office.

They have already held four two-day strikes since mid-January.

The Employment Relations Authority is due to provide urgent independent facilitation on May 9, 10, 13 and 14, in an effort to settle the long-running dispute.