Consent has been granted to develop a 90m concrete platform extension into Auckland's Waitematā Harbour, allowing huge cruise ships to berth, despite a passionate and active opposition. 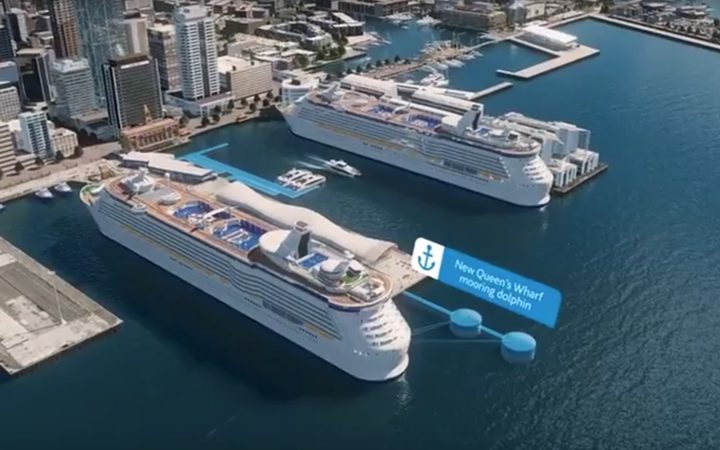 An indicative picture of the mooring dolphin on track to be built at Queens Wharf. Photo: supplied

Auckland's Mayor Phil Goff on the 2016 campaign trail said "not one more metre of the harbour should be infilled for commercial activity", but that appears to be dead in the water, after a panel of three independent commissioners agreed yesterday to allow the construction of the two new concrete ship mooring "dolphins".

Mr Goff stressed that the extension was temporary, with commissioners stipulating in their report that it be removed after 'no more than 15 years when Captain Cook Wharf becomes operational for cruise ships'.

"They said that the negative impacts on the environment 'could be avoided, remedied or mitigated' and that these were outweighed by the real positive economic and social benefits," Mr Goff said.

"They noted in particular that the dolphins were not there permanently, that they'd be in place for less than 15 years."

The report lays out a number of conditions the council's construction arm, Panuku, will need to adhere to including environmental best practices and mana whenua are to be consulted.

There were 329 submissions on the application, 44 in support and 284 opposed.

Michael Goldwater, from the group Stop Stealing Our Harbour, said the decision was a huge disappointment.

"Mayor Goff and Auckland Council have valued corporate welfare and the cruise industry over the long-term wellbeing of the harbour," he said.

"Phil Goff promised that there would be no more concrete in the harbour for commercial use and he has failed to keep that promise."

Julie Stout, from the urban and architectural design watchdog Urban Auckland, said it would compromise the view and use of the harbour.

"Queens Wharf is the prime single wharf in our city. It's where the harbour meets the sea and it should be a fantastic people space.

"What they're proposing is to put a two big 15m-in-diameter concrete mooring pads that stick 90m out into the handle. This is completely inappropriate."

Royal New Zealand Yacht Squadron general manager Hayden Porter said the structure would be a navigational hazard in the already-crowded part of the harbour.

"It's decreasing the amount of usable space within the harbour for, ultimately, very few visits per year.

I think everyone agrees we want those ships to come and that there are huge economic benefits, but we also feel that there was some other options that should have been considered that wouldn't pose such a long-term problem."

The cruise ship industry was banking on those economic benefits, however.

Craig Harris from the country's cruise ship agent ISS-McKay said without the wharf expansion, the city - and the country - would miss out.

"Auckland Airport benefits; the hotels benefit; we employ up to 200 to 300 taxis and buses when this happens; there's restaurants," he said.

"And a lot of people use Auckland as the gateway to tours before or after joining their ship. Our company, at the moment, has cancelled eight of those ships because there's been no facility."

Objectors have until 15 May to lodge an appeal.