Auckland's port company is looking to build a one-hectare rooftop park, a hotel and a wharf extension as part of a "30-year masterplan". 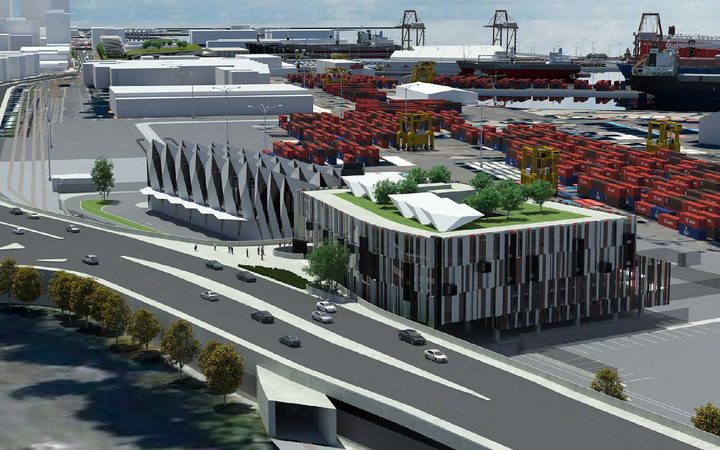 The council-owned company said its plan would allow it to grow during the decades leading up to a possible relocation being considered by the government and council. It is pitching its plans to the public before seeking the approval of Auckland Council.

The biggest change, and likely the most contentious, is a re-arrangement of the general cargo operation which reaches from Captain Cook wharf in the west, through to the Fergusson container terminal in the east.

The port wants to build a 13m piled extension running 330m along the harbour edge of Bledisloe Wharf to create space for large-vehicle transport ships. 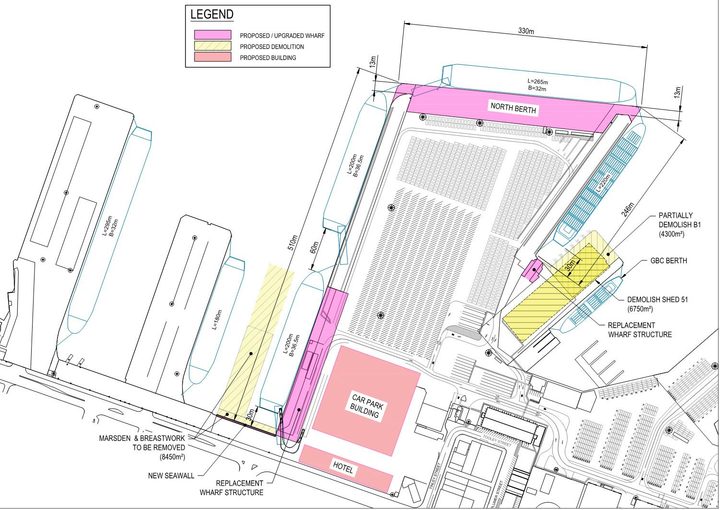 That would allow a rearrangement of other berths, ending the use of Captain Cook Wharf for car imports and freeing it for public space, and perhaps a cruise ship berth in five to 10 years.

The already shortened Marsden Wharf would be demolished.

He said he was ambivalent about the Bledisloe extension, which would be built on piles.

"There are areas of the port proposal that are interesting and constructive, and there are areas that I'm far more conservative on, including the extension of any wharf," Mr Goff said.

"If they can come back to me and show they are taking infrastructure out of the harbour ... maybe they can persuade the community and maybe they'll persuade me."

A hotel is proposed on the Quay Street frontage of Bledisloe Wharf to add city-life to the edge of the port precinct, although it might also house a technology centre.

That building would link to a 1ha park on top of a five-level 2600-space car park building, to help accommodate the flow of light vehicle imports through Bledisloe Wharf. 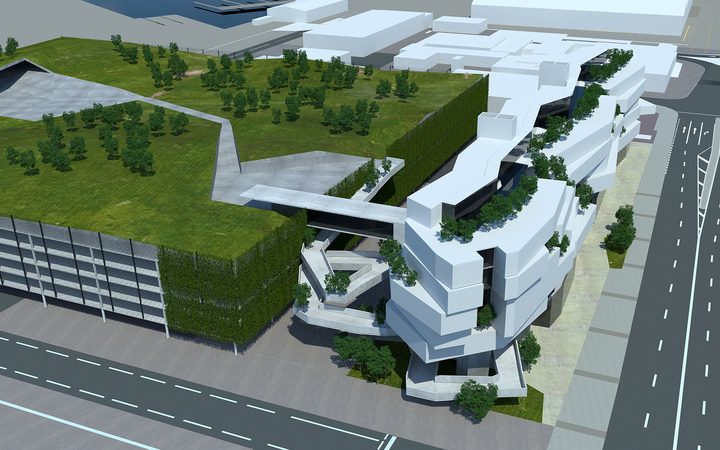 A concept drawing of a hotel on the Quay Street frontage of Bledisloe Wharf that would connect to a 1ha park atop a 2600-vehicle carpark. Photo: Supplied / Ports of Auckland

Big productivity and capacity gains are planned for the container terminal with automated, driverless straddle cranes being introduced and a new long berth being completed along the northern face of the terminal.

Ports of Auckland said that would help double the number of containers that could be handled, coping with a future population of up to 2.7 million Aucklanders.

The latest population forecast puts that in the mid-2040s at the earliest, and the port said there was potential to expand capacity beyond that.

Ports chief executive Tony Gibson said the changes in the cargo area hinged on being allowed to add the new berth along the extended northern face of Bledisloe Wharf.

"We're really working in a very constrained way so we really need to do something there to cope with future freight demand," he said. "We're not talking about reclamation."

A new port head office building and public plaza would also be built on the Quay Street frontage, in a manner that would allow future uses should the port eventually relocate.

It said cement imports had doubled in the past seven years, and vehicle imports had trebled over the same time - with up to 10,000 vehicles on its site at any one time.

Ports of Auckland said it hoped to get the go-ahead from its council owner on its plans but recognised the possibility of a later, politically-driven port relocation.

The government has committed to funding and leading work on the feasibility of moving the port and opening waterfront site to new uses.

Its agreement with New Zealand First includes Northport near Whangarei as an option, but does not necessarily favour it over others.

Auckland Council has been continuing its own consideration of the port's future, after an early study favoured a move to either the Firth of Thames or Manukau Harbour at some point in the coming decades.

Mr Gibson said the port company itself was keeping out of that debate.

"We still have to cope with freight demand, so we've developed this 30-year masterplan which gives the council [time] to design and plan a new port somewhere else."

The company said it wanted to reassure customers that it could continue to grow while that debate and planning continued.

Lobby groups, which in the past opposed the planned reclamation of the harbour for wharves, were generally supportive of the 30-year plan.

Julie Stout of Urban Auckland said the big issue now was the longer-term future, and the debate over relocation.

"In 30 years Auckland will be 3,000,000 people or more, and ships will be bigger, so we want to see a long-term strategy in place for what's turning out to be port infrastructure for the upper North Island," she said.

Ports of Auckland has launched [www.masterplan.poal.co.nz a website] to promote the ideas and seek feedback, and hopes to apply for resource consent next year to start on the parking building.

But an Auckland Iwi called the 30-year plan a cynical step to avert possible long term re-location of the port.

Ngati Whatua Orakei's Ngarimu Blair said it signalled the company intended to remain for the long-term.

And Michael Goldwater from Stop Stealing the Harbour doubted the wharf extension was needed and he questioned big spending, such as a new corporate office.

Mr Goff had his first meeting this morning at the Beehive with Prime Minister Jacinda Ardern - who said afterwards she had always opposed expansion on the port's present site.