The long weekend looks set to start off with great weather for most, but it'll be downhill from there, according to forecasts. 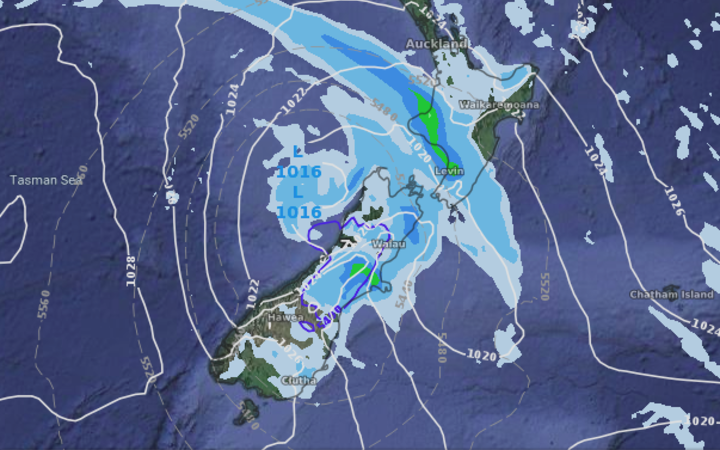 A MetService screenshot of the forecast for Easter Sunday as of 18 April. Photo: MetService

MetService said tomorrow was mainly looking to be a good dry day for most of the country, while Fiordland and Westland may experience some rain.

"The front will only affect the far southwest of the South Island by the end of the day, but the front will gain some momentum and head further north on Saturday," MetService meteorologist Kyle Lee said.

It warned campers and trampers around Fiordland National Park to keep an eye on some heavy rain that's expected to hit during the night.

The rainfall will then slowly move up to the West Coast on Saturday, but Southland, Otago and Canterbury could expect that to slightly spillover on to them as well.

Plenty of sunshine for New Zealand today, with more of the same tomorrow. Enjoy the settled weather @OmakaAirShow here is a pressure map showing the high pressure still dominating tomorrow afternoon. The weather is due to change so keep up to date at https://t.co/Yjbq0jxdqz. ^KL pic.twitter.com/fbnEXhHIlg

The North Island is set to be mainly dry again on Saturday, apart from a few light showers coming in from Northland and perhaps northern Auckland and northern Coromandel Peninsula.

But strong winds may also pick up around Wellington.

On Sunday, the rain is set to move from Fiordland and Westland into the North Island, and the eastern and upper South Island - with Wellington and maybe parts of Wairarapa set to catch some of the rain.

An area of low pressure will form on the back heels of the South Island cold front and this will produce more rain and showers as it moves in to the North Island.

It will also produce more rain and showers around the eastern South Island and while clearing northwards across the day it may bring some wet weather into dry parts of Canterbury.

For farmers in need of the rain, MetService said there may be some heavy falls in the western side of the North Island on Sunday.

On Monday, high pressure continues to grow from the south west across the South Island with mostly dry and sunny weather moving back in to the lower half of the island.

More morning rain and showers may continue to creep in the North Island, especially around Taranaki - and perhaps lingering longer into the afternoon for the east.

"There could be potential for some heavier and thundery showers on Easter Monday which might not be welcome for anyone planning on driving home in the North Island that day," Ms Lee said.

Some rainfall or clouds could loom over the upper and north eastern parts of the South Island but will ease in the afternoon.

Looking to get out on the water this weekend? ‍♂️ It's still pretty warm! ️

Sea temps are near or above 20˚C from the Coromandel to Northland. pic.twitter.com/QqpcUeAVRX

In Easter fashion, Niwa has also been rating each day of the long weekend weather on a scale of 10 eggs.

New Zealand's #Easter outlook, in eggs out of 10: