More than 20,000 people in a Pakistani city have created a striking visual tribute to the victims of the Christchurch mosque massacre. 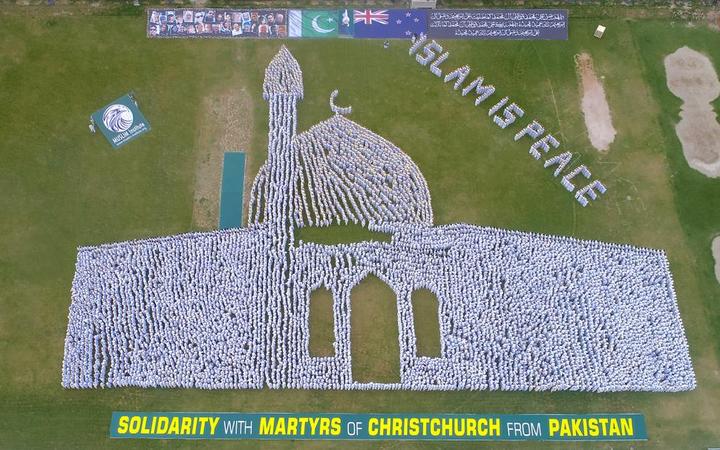 More than 20,000 people in Shorkot, Pakistan created a striking visual tribute to the victims of the Christchurch mosque massacre. Photo: Supplied to RNZ

Dressed in white, they stood in formation in front of a shrine to create a huge living image of the Al Noor Mosque in Deans Avenue, 13,000 kilometres away.

They lined up behind a large banner saying 'Solidarity with Martyrs of Christchurch, from Pakistan', and hundreds more formed the message 'Islam Is Peace' in English.

Spokesperson Asif Tanveer Awan says the event in the city of Shorkot was organised by a think-tank, the Muslim Institute, in order to send a strong message to the world that Muslims want peace and cooperation.

Chairperson of the Muslim Institute, Sahibzada Sultan Ahmad Ali, said through this peaceful expression of solidarity, people have given a strong message to the whole world that Islam is a religion of peace.

"Such peaceful and huge expressions has proven the narrative of Muslims maintaining their peaceful society and cooperation among civilizations despite the rise of extreme tendencies in different parts of the world," he said.

Participants of the event chanted the slogan "Islam is peace" continuously for two minutes.