Early risers in Wellington, Taranaki and Auckland were treated to a spectacular red sky at sunrise - before a change of weather hit the North Island. 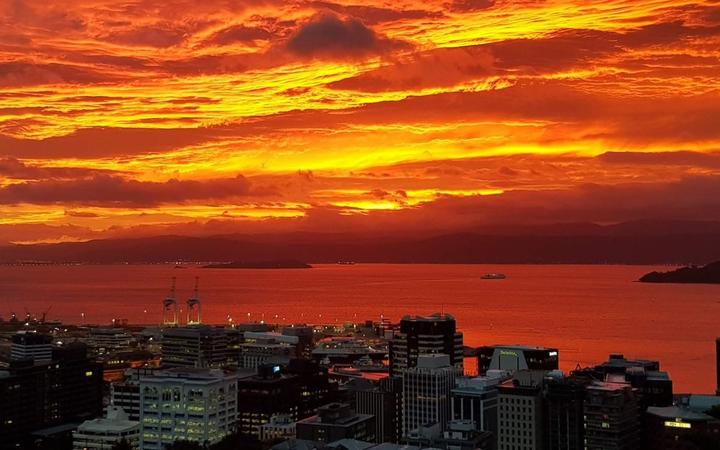 Red sunrise over Wellington. The old saying 'red sky in the morning, shepherds' warning' looks like it'll turn out to be right - at least for today. Photo: MetService / Heath Gullery

MetService forecasters warned of heavy downpours in the North Island as a front sweeps up the country.

The front dumped rain on parts of the west of the South Island yesterday before heading through to the central North Island.

Stunning sunrise in Wellington (and Taranaki) this morning for those up early enough. Watch out for the change of weather today. Images shared with permission of owners. ^AG pic.twitter.com/legmXjLwny

About 200mm of rain fell on the ranges of South Westland yesterday and caused the temporary closure of State Highway 6 between Makarora and Haast.

Rainfall in the North Island isn't expected to be as prolonged as it was on the West Coast, but brief heavy rain is forecast for several places.

Wellington and Wairarapa from Featherston southwards are getting thundery downpours through to this evening, and rain is due to continue on the Marlborough coast north of Clarence and the Marlborough Sounds.

Look out the window, Aucklanders pic.twitter.com/wwzdvJImFK

A severe weather watch is in force for northeast Marlborough, Wellington and southern Wairarapa.

MetService forecaster Peter Little said thunderstorms were also possible, mainly in the north and west of the North Island. "As well as heavy rain, any thunderstorms that occur could bring hail, strong winds and even a small tornado."

There's a risk of thunderstorms for much of northern & central NZ today. See https://t.co/BZWb7ZPiRd for more detail. ^PL pic.twitter.com/67s6VOGX2M

The weather is due to clear in most places on Saturday and a cold start expected over much of the South Island.

"Most folk in the South Island can expect a chilly start to their Saturday," Mr Little said.

"There's a good chance of a frost in inland places such as Central Otago."

Parts of the North Island are likelyt to have a cold start to Sunday, with Taumaranui and Taupo forecast to dip to 2C on Sunday morning.

A weak front moves up the country during Sunday and Monday, with showers returning to southern and eastern areas and temperatures remaining cool.