The developer of an Auckland skyscraper has been forced to lodge a new building consent, after officials ruled the fire design did not meet new regulations. 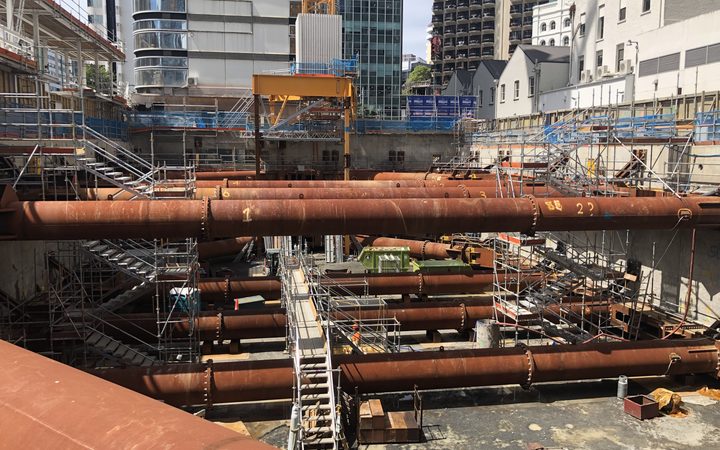 The 55-storey Seascape apartments on Customs Street East, will be the tallest building behind the Sky Tower and includes 221 apartments.

In mid-2017 the apartment's designers asked officials to approve having one stairwell for the top ten floors of penthouses, instead of two.

But a determination released by officials at the Ministry of Business Innovation and Employment in December found the fire safety design did not comply with the Building Code.

The report noted that firefighters might be delayed or impeded in reaching the fire and then assisting in rescue operations and performing firefighting operations.

One expert found that if there was a fire on level 49 or above, firefighters would have to walk through private apartments to get to the stairs.

"The availability of this route is not guaranteed because the internal layouts of the apartments may change. … Without a connecting lobby, fire fighters who are expected to set up their staging area one or two floors below the fire floor (as per their standard training for high-rise building) may have difficulties in reaching the stair from the lift lobby to continue their firefighting activities, " the expert said.

"For firefighters to attend to a fire on L49 or above in this building, the staging area would be on L46, which could be more than 2 floors below the fire floor (as many as 8 floors). This is a non-standard firefighting procedure (for high-rise building) that is not in line with the training received by firefighters and could cause delay to firefighting activities," the expert said.

In a statement the developer, Shundi Customs said it was preparing a new application.

"Shundi are working collaboratively with Fire and Emergency New Zealand (FENZ). Shundi have confidence that the current process will result in a robust fire engineering strategy that satisfies FENZ, independent reviewers and Auckland Council," it said.