The building of the country's largest residential skyscraper has hit another snag with weak points in the basement concrete. 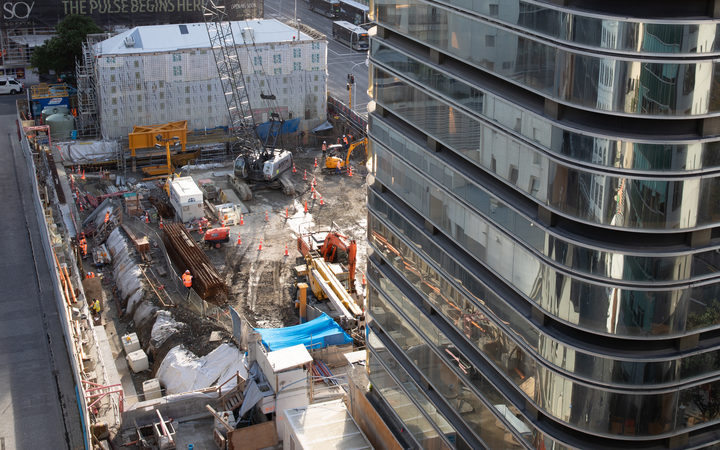 Construction of the Seascape apartments in Auckland began in October last year and will be second only in height to the Sky Tower building.

But before it can dominate Auckland's cityscape, a five-level basement for carparks is being built.

Led by China Construction New Zealand - part of the world's largest building firm - the project uses a diaphragm wall rather than traditional piles for its structure.

This wall is formed by pouring concrete into specially-prepared holes to form an underground retaining wall around the perimeter.

The inside is then excavated in stages to form the basement.

However, as contractors dug down, problems were found with the concrete.

"The term we use in construction for this is 'boney concrete', it's just a bit patchy.

He said he had experienced similar issues with projects overseas.

"It's normally due to the poor soil condition in the upper levels of the building site. In our case it's disturbed soil from having a number of demolished buildings that were there beforehand and all the soil in this area is reclaimed soil.

The Council requested a stop-work, which lasted several days as it reviewed the issue and plans to remedy it.

In a statement it said it was "satisfied" with the work and it was constantly reviewing remedial work.

Mr Douglas said the repairs were being carried out by Freysinnet for March Construction - part of an international specialist Soletanche Bachy - with monitoring by China Construction, Matt MacDonald, and Tonkin & Taylor.

"The use of diaphragm walls is not common in New Zealand, and now all parties are satisfied with the remedial process, works are continuing on site," he said.

"We test it for strength and then we knock out the area around where there might be a boney section, it might be aerated, and you'll knock it back until you get to hard concrete and then you'll use an approved just product to fill it and get it back up to full size and strength," Mr Douglas said.

However, it is not the first issue the project has faced.

Last year the designers asked officials to approve having just one stairwell for the top six penthouse floors instead of two.

Mr Douglas said that was still being worked through, and while Auckland Council was happy to issue a building consent for the basement work, the consent for the structure above ground was pending the fire determination.

The building also awaited the go-ahead to use steel from China.

"We're still in the final throes of going through a [Request for Information] process at Council... basically all the boxes have been ticked, tests have been done.

"The council has requested additional destructive testing of the steel that's been delivered here for the temporary works to prove its quality, which as all passed.

"Yeah it has been a bit of a problem but I understand Auckland Council's reticence because there have been issues with Chinese-delivered product in the past, so we do have to prove ourselves.

Mr Douglas said while the challenges had some impact on their timeline it was unlikely to affect the 2021 completion goal.

"As issues arise we just deal with them and just move on," he said.

"There's probably a couple of months of delay but in the scheme of things that's fairly minimal given the project is going to run for four years.

In a statement the developer Shundi Customs said it hoped "the delays would be caught up by the contractor during subsequent construction activities."