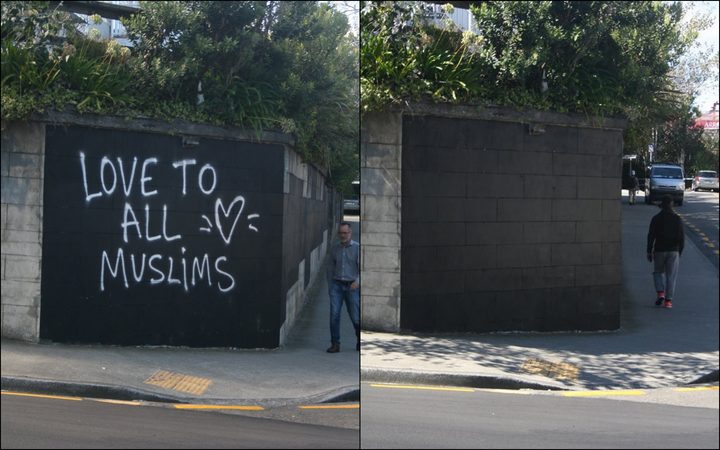 Residents have taken to social media and contacted the council directly after paintings in the city showing support for muslims and sharing condolences for Friday's terror attack were painted over.

Last night the council confirmed from now on, the messages could stay.

"It reminds you that people are occupying the same sort of emotional space at the moment ... which is wanting to be kind and supportive and make our Muslim community, our refugee and migrant community feel loved.

"I guess everybody's just expressing their extreme despair at what's happened and their desire for it to never ever happen again."

She said she had seen four or five locations which had been painted over and contacted the council to complain.

"Unfortunately this seemed to have slipped off the radar and they've just been carrying on as business as usual with their graffiti removal policy... but in this case it's inappropriate.

"It's within hours of [these messages] going up, it feels a bit callous."

Another resident Bea Wooding noticed a message on Aro Street saying 'Stand together NZ, our people murdered' and another saying 'love to all Muslims' on The Terrace had been removed.

"The one by my flat was removed by last night which made me feel really sad. I had wanted to point it out to a friend to show how great it was and then it was gone.

"It's just heartbreaking really that these messages which are for support and solidarity and love are disappearing."

She said she rang the council who confirmed they had removed the messages, due to their standard operating procedures.

However as of last night the council had changed its tune.

Mayor Justin Lester said the contractors were just doing their job but has since told them the messages are welcome and encouraged.

"What we've done is we've said to them 'look our policy is zero tolerance on graffiti, but actually given the situation and the times that we're in please go easy on this and don't do that for the foreseeable future."

He said contractors had been told to use their discretion.

"If someone's putting up messages that are vandalism or if they're hate messages or contain swearing for example we won't tolerate that, but we will tolerate messages of support being expressed in a positive way."

Mr Lester said most messages would eventually be removed, but others could be permanent.

Both Auckland and Christchurch councils said any messages painted or posted around their cities had not been removed.