A muslim community advocate says burials are bringing much needed closure to grieving families, but some are still being bombarded with media requests. 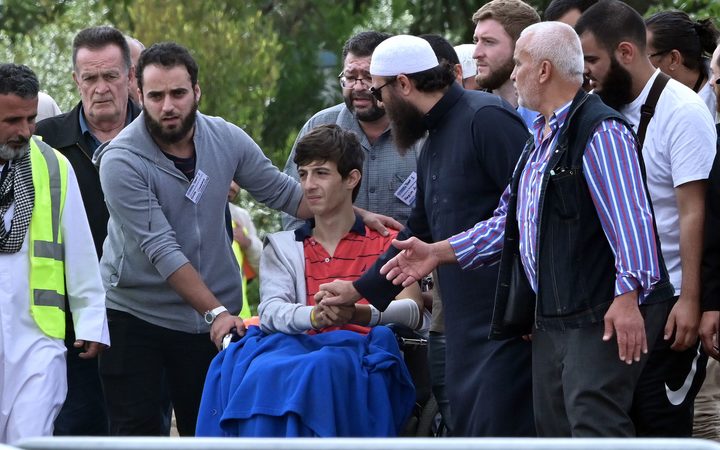 Zaid Mustafa (in wheelchair), who was wounded by the gunman, attends the funeral of his slain father Khaled Mustafa and brother Hamza Mustafa at the Memorial Park cemetery in Christchurch today. Photo: AFP or licensors

The first burials were held yesterday after a long wait for grieving families for bodies to be released and more will continue today.

Community advocate Guled Mire said some families are struggling with the media attention and they do need space to grieve.

"I've been speaking with a family who lost a three-year-old who've been bombarded with media requests. They're trying to grieve and it's too much for them to deal with," he said.

He said there hasn't been any major financial issue with burials for families and the Muslim community is rallying around one another to assist.

"The strength of the Muslim community at this time - we're all united on this front. If money is an issue we're looking at supporting each other. We're really trying to stick together in this."

Muslims are opposed to certain forms of loaning and borrowing money on religious grounds which can make finance in Western structures challenging.

"It's not an ideal situation. Assistance should be provided as fast as possible," Mr Mire said.

Mr Mire says the planned human chain around mosques on Friday - to make sure muslims feel safe during prayer - is a beautiful gesture that emphasises support to the Muslim community.

He said there has been some debate about the plan for Christchurch women to wear hijabs on Friday, with some calling it cultural appropriation. However, Mr Mire supports the idea and says it shows solidarity with muslim women.

"Anything that can really bring New Zealanders together and feel the Muslims experience is a beautiful gesture."