Eight people injured in the Christchurch mosque attacks are still in a critical condition, with a total of 29 still in hospital. 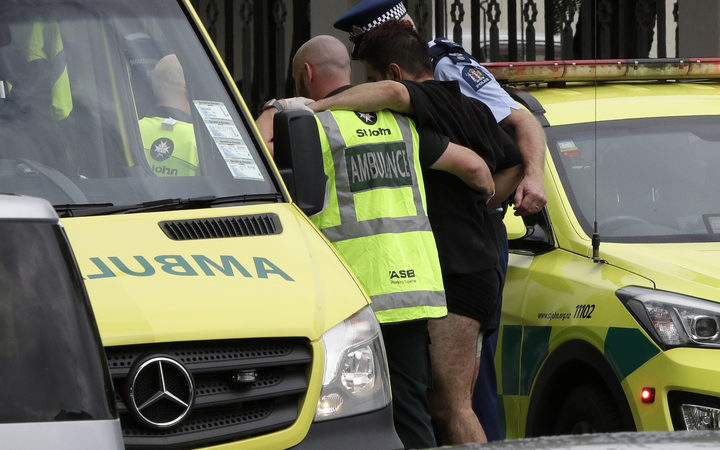 Police and ambulance staff help a wounded man from outside a mosque in central Christchurch Photo: AP 2019

The victims in critical care include a four-year-old girl at Starship Hospital. Her father is in Auckland Hospital in a stable condition.

"The response from the clinical teams at Christchurch Hospital has been extraordinary," Mr Meates said.

"There are very few hospitals probably anywhere in the world that could handle that number of [gun shot victims] ... recognising that of everyone who got to the emergency department, not one person died after that."

After the shootings, some patients were in "absolutely critical" condition, while others had more minor injuries, Mr Meates said.

One patient had undergone 11 surgeries and would face further medical procedures over coming weeks and months, he said.

"For a number of these individuals, this is going to be a long, long road to haul."

The hospital has postponed planned surgeries on many patients and expects this will continue for some time.

Mr Meates said the tragedy had taken a toll on staff, which had been under "extreme pressure" for years following major earthquakes and other disasters.

Staff had received debriefings and the health board was focused on maintaining their emotional well-being, he said.

"Like many in the community, there's a state of shock.

"Many are still trying to process the enormity of what's happened and getting your head around a senseless, violent terrorist act.

"Once the teams have got through the initial response, that's when a lot of people will be doing a lot of processing."

Extensive support is being provided for families of victims and the broader community.

"In terms of the Muslim community, the sense of love and connection from the community has been absolutely outstanding and we hope that is going to be part of our fabric going forward," Mr Meates said.