Those who knew New Zealand woman Linda Armstrong say they take comfort in the fact she is now in heaven, where she belongs. 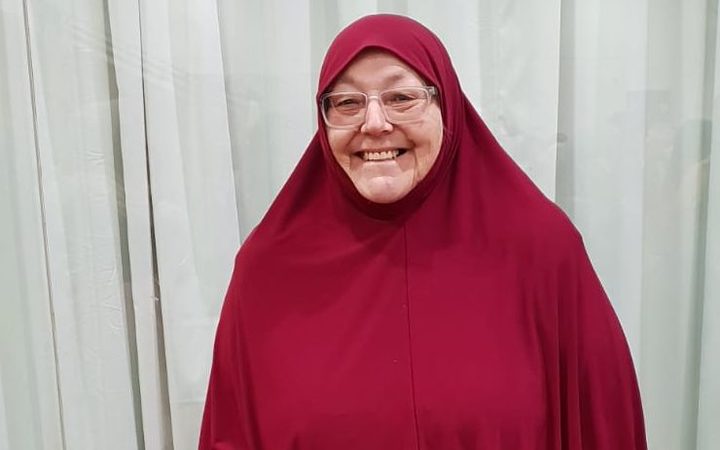 Linda Armstrong in the hijab Tayeb and his wife bought her on a recent trip to Malaysia. Photo: Supplied

Ms Armstrong was shot while praying in Christchurch's Linwood Mosque on Friday afternoon.

Tayeb, from Ashburton, said it hurt to lose his sister in such a violent way but she was now in a better place.

"She died as a martyr. This criminal who does this thinks that he has done something bad for them but he's not right. He does something very good for them."

Born in Auckland, Linda Armstrong converted to Islam in 2011 after meeting Tayeb.

He said they both spoke French and grew to know each other well throughout their decade-long friendship.

"She was a great, smiling, nice lovely person. She loved all people around the world."

Ms Armstrong had sponsored a Syrian refugee in Jordan and helped Tayeb improve his English.

He said he was at work in Ashburton when he first heard about the mosque shootings.

After a sleepless night at home he arrived on Saturday morning.

He said he had seen a brother get shot in the livestream video of the massacre but Ms Armstrong was just missing when he got to the city.

Her death has since been confirmed.

Tayeb had spent the last three days at the hospital and Hagley Oval's sports centre waiting for the news that her body has been released.

Ms Armstrong had written in her will that she wished to be buried in the Islamic way, he said.

Tayeb said while he's waited for her body to be released, he's heard stories his sister pushed others out of the way when the gunman stormed the mosque.

He said he had cried a lot since learning his sister had died and was carrying sunglasses to hide his eyes when he couldn't stop the tears.

Ms Armstrong had always told him Friday was an important today for her, he said.

"We don't want her to die this way, she has been shot, but we are very happy. She always believed that she would die on Friday, that was her wish. I'm very happy that she got her wish."

Tayeb said he hoped to have his sister's body back soon so he could lay her to rest tomorrow.