Among the survivors of the Christchurch mosque shootings still coming to terms with what he has experienced is Shoaib Gani. 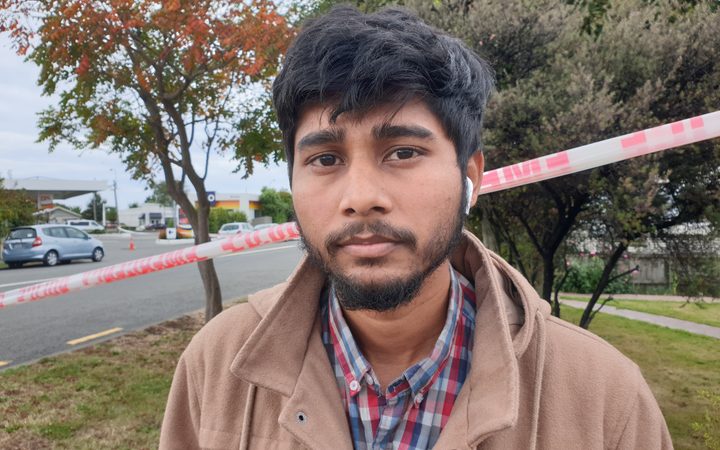 Shoaib Gani was in the Linwood mosque at the time of the shooting. Photo: RNZ / Conan Young

The Indian engineering student was at the Linwood mosque where seven people died.

He hid behind a table and, wanting to talk to his family for one last time before he died, tried calling them back home in India.

"But my mother did not pick up the call and then I called my father but he did not pick up my call. I called multiple times but nobody picked up and I screamed down the phone to pick up. At that moment I thought...if they see these missed calls I don't know how they are going to react."

He is desperately keen to meet fellow worshipper Abdul Aziz and thank him for saving his life that day.

Mr Aziz hurled an Eftpos machine at the attacker, then grabbed a gun left on the ground threw it at the attacker's car, preventing more deaths at the mosque.

"He couldn't fire [the gun] but when the shooter went to his car, he threw that gun on to the windshield of the car and the wind shield broke. So that panicked the attacker and he took off. He's a real hero."

He paid tribute to his friend Talha Naeem and his friend's father who died at the Deans Ave mosque.

"I basically love playing football and he's the one, I can't forget him, who said we play football, you can come and join us because I was feeling very lonely on first coming to New Zealand...he was a really nice guy. He used to pick me up because I didn't have a car...I met his father who was a really nice man."

Shoaib's family was desperate for him to leave Christchurch and return home to India.

But as the only son of a family that mortgaged its home to allow him to study here and make a better life for himself, he feels a deep responsibility to stick it out, finish his studies and then apply for residency.

Shoaib lost a lot of his friends on Friday but is grateful for the kind words and generosity that had flowed from the people of Christchurch since that day.

After Wednesday's funerals he will travel back home to be with his family for two weeks but was determined to return to his adopted city.