Limping badly, Mohammed Afroz and his three friends went to check over the site where many of the 50 victims will be buried. 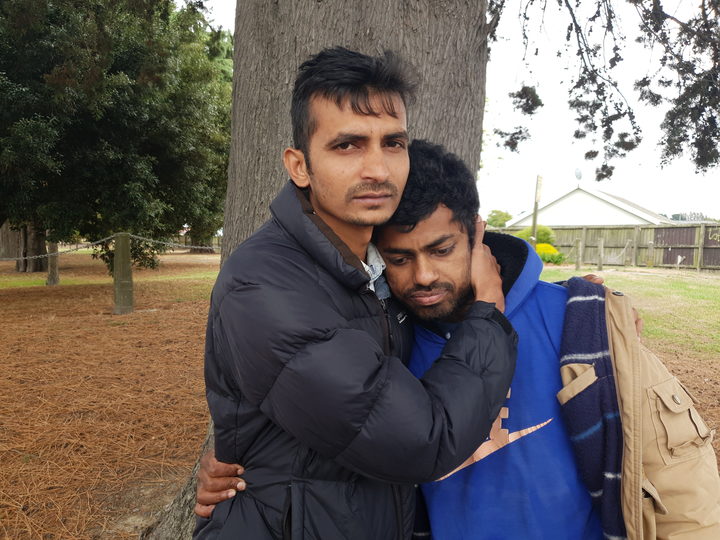 Friends Mohammad Akheeluddin (left) and Mohammed Afroz have been comforting each other since witnessing the horror or the Christchurch mosque shootings. Photo: RNZ / Matthew Theunissen

His leg was injured in the panic to escape from the Al Noor mosque near Hagley Park.

His friend Mohammad Akheeluddin was at the Linwood Mosque and also escaped the killing.

Many of their good mates did not.

Mr Afroz said he can't go home because he can't bear to see the belongings of his two flatmates, who were both killed.

"The room was very quiet now ... we can't sleep there because the two people are not with us."

Like all the stories that have been shared by survivors from the Linwood and Al Noor mosque shootings over the past few days, Mr Afroz talks about hideous scenes of violence and pain.

"One Somalian kid, he was three years old. I think he just had three, four shots on him. He certainly died.

"And one of my flatmates ... he died in the incident. Literally I saw everything there but I couldn't help."

"I have my friends very close to me. And the police are very kind, and the hospital.

"Actually I felt very calm when the Prime Minister came. I felt very happy about that. I was panicked until then."

The two young men are from India and don't have family here so have been leaning on each other and their other friends.

They both expressed huge amounts of gratitude to the police, medical staff, government, council and New Zealand public.

One of their friends remains in hospital in a critical condition.

Only one body has been released to the families so far, with most opting to say goodbye in a group burial later this week.

At the Memorial Park Cemetery in Bromley, council staff frantically worked to dig graves and prepare for the unprecedented funeral.

Latef Alabi, the assistant Imam at the Linwood Mosque, said he's unsure whether all of the dead will be buried at the cemetery, as some families may want their loved ones sent back to the country of their birth.

It's expected to take a few days before all the victims have been laid to rest, or repatriated overseas.

Kawthar Abulabin, who escaped the massacre at the Al Noor mosque, has told her story so many times since Friday it's getting exhausting.

But she wants the world to hear it.

"It's good to for the world to see what's happened. Because people around the world they thought we are terrorists. They said, 'You deserve what you get'.

"So this is good to tell the people we came to New Zealand looking for peace.

"I will not change my opinion about New Zealand. It's my country. And the people here are very nice. They supported me.

"You know, I have lots of support, lots of love, lots of kindness from all of the New Zealand people here."

This afternoon Deputy Police Commissioner Wally Haumaha said they were aiming to have all of the bodies released by Wednesday.

He said one body was released last night, but the family was waiting for a second body to be released before they moved forward with the burials.

The President of Federation of Islamic Associations of New Zealand, Mustafa Farouk, said families had been given options for private burials, or sending the bodies back to their home country, but most had opted for a group burial.

"They have already, a number of the families, decided that they want their loved ones at the same time.

"Because they appreciate the fact that this is not only now that involves our community or our country alone, they have allowed their loved ones to be buried at the same time."

Police are hoping to have the mosques open by Friday, the holy day for the Muslim community.

Karakia's and blessings took place at both mosques this morning with community leaders.

Support from Christchurch and further afield

Shabir Khan and Zainal Ali were among a group of men who arrived at the Memorial Park Cemetery this morning.

Mr Khan said the group had flown from Auckland to show their support for their brothers and sisters.

He said it had been difficult for the families to wait to retrieve the bodies of their loved ones but they knew it wasn't in their hands.

"It is tough. The burial is supposed to be as soon as possible but we do understand that it's from the God, it's all written the day they're going to die and the day they will get buried. No one can change that and they're doing their job."

Zainal Ali said people were shaken up but the community would recover.

"It's a very shocking thing in New Zealand. I've been here for 24 years, I'm basically from Fiji, and I've never had something like this happen. It's a bit of a shock but I think police, the community and all the different cultures are getting together and they are all supportive and people will recover."

He said the group had visited the Christchurch Hospital to see the injured and their families.

"There was nurses we just asked them how they were recovering. In the medical wards we met the families. We saw patients lying on beds fighting for their lives."

Andrew MacBeath lives opposite the cemetery.