A Teapot Valley family is calling on the government to provide further support after their land was destroyed by fire crews fighting the country's largest bushfire. 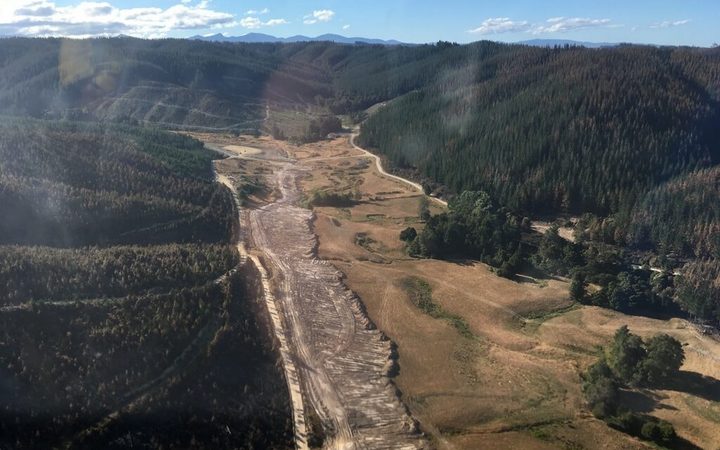 More than 2300ha of land in Tasman was destroyed by the fire, with about 3000 people forced to evacuate their homes.

Pauline Marshall, who lives next to the fire's boundary, returned home after 16 days to find hectares of her land covered in firebreaks.

"They've just cut through wherever it was necessary to have them to stop the fires. They've gone through fences, and water lines and paddocks. It's changed the look of things considerably," Ms Marshall said.

During the initial response, bulldozers and heavy machinery lifted earth to create a dirt road ring around the perimeter of the blaze to contain it. Fire crews are authorised in an emergency to enter a property and create firebreaks if necessary.

"We've lost a lot of pasture, there's been a lot of damage to water lines, and irrigation lines and fences. So about 10 percent or maybe even 15 percent of the property," Mr Marshall said.

More than 300 dairy cows were kept on the land under an agreement with their owner, Michael Shearer.

They were evacuated to nearby land in early February and still have not returned.

For the 16 days Mr Shearer was away from the land, he was unable to supply Fonterra with milk.

"We weren't able to supply because the shed we were milking out of hadn't been MPI approved recently so we were just milking into a slurry tanker, but Fonterra has supported us financially through the times," Mr Shearer said.

The lines and fences that are vital when farming the stock were ripped out of the ground as bulldozers ploughed through building firebreaks.

"We've got half the farm that's got good water on it still, so that gives us enough of a platform to carry on and milk on while the other half gets repaired. But really, it's kind of a waiting game now till we get the okay to shift the fire breaks back and can then put all the fences and waterlines back in place," Mr Shearer said.

Receiving the all clear to start repair work seems likely to take some time as the firebreaks must remain in place until the fire is completely extinguished.

Then the Marshall family must grapple with the cost of repair work.

Ms Marshall's land isn't insured. She has owned farm land for 60 years and said it has never been needed.

At this stage she doesn't know how much it is going to cost to repair the property but knows there is a huge amount of work to do.

She is now waiting on her application to the Mayoral Disaster Relief Fund.

"It's going to cost a great deal of money to do all of this and I don't imagine the mayoral fund will have that much money, so we just don't know yet. We'll have to wait and see," Ms Marshall said.

Simon Marshall said even if they received funding it might not be enough. He's called on the government to help.

"It seems like some properties, like this one, have had a vast amount of damage done to them in the form of firebreaking, and it's not just to protect this property, it's to protect the wider community," Mr Marshall said.

"Other properties further out haven't had any of this happen at all, so it only seems fair that the government does come to the party.

"It's imperative [land] gets reinstated and sown back down in the spring time, so that the grass re-grows in time before winter. We'll have to make a move on it when we're allowed to," Mr Marshall said.

The Nelson City and Tasman District Council are yet to set a date for funding allocation.

The Tasman District Council said it is currently exploring other funding avenues to assist people affected by the fire.

More information is likely to be available next week.