A coroner has called for a ban on bed levers using metal hoops that caused the deaths of three elderly people.

Three elderly people have died after getting their heads caught in the hoops of levers intended to help them get into and out of bed. Photo: 123rf.com

Jane Mansfield Lee, who was 74, died of giant cell myocarditis after being asphyxiated by getting her head caught in the hoop of a bed lever at her Thames home in October.

Coroner Michael Robb said the type of bed lever that caused Mrs Lee's death was the same as that which had been provided by many District Health Boards and the Accident Compensation Corporation to help those suffering mobility problems to get in and out of bed.

The lever included a metal hoop extending from under the mattress to the side of the bed. The hoop was 17cm wide, which was big enough for a person's head to become trapped within it, Mr Robb said.

The Coroner released his reports on the two latest deaths today.

At the time of Mr Lee's death in 2017, an inquest heard that physiotherapists and occupational therapists from the Bay of Plenty District Health Board were not aware of any risk of suffocation posed by the bed lever.

The health board now "fully acknowledges" the risks posed by the lever, Mr Robb said.

"I anticipate that the risk of asphyxiation is unrecognised in all regions of New Zealand," he said.

"The reality is that at least three patients to my knowledge have died from asphyxiation through their use of these metal hoop bed levers.

"I find that the evidence is overwhelming that the basic metal hoop bed lever design does present a risk of asphyxiation, and it is an acknowledged and known risk by at least some manufacturers."

One business continued to offer the hoop levers, while describing other designs as removing "the risk of a head being entrapped", Mr Robb said. 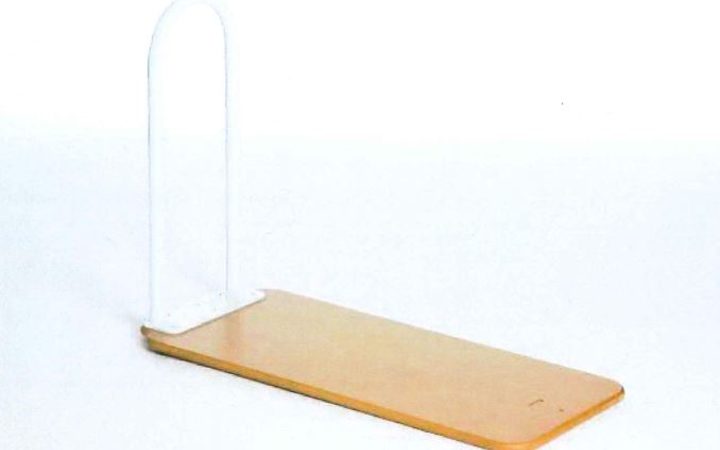 The bed lever design with a metal hoop that poses a risk of trapping people's heads. Photo: supplied

Enable New Zealand, Accessable and the Ministry of Health stopped buying and routinely issuing bed levers with hoops from 11 December 2018, after the Coroner informed them of his concerns.

However, the Ministry of Health had not recalled bed levers with hoops and they were still being issued at times after a safety assessment.

Mr Robb recommended that the Ministry of Health remove bed levers with hoops and not issue them under any circumstances. District Health Boards and ACC have also been asked not to use the hoop design.

He recommended they be replaced with three-bar bed levels, which posed no risk of entrapment and did not cost much more.

The Ministry of Health has expressed its sympathy to the families of those people who died after becoming trapped in the device.

The group manager of Medsafe, Chris James, said all new levers provided to patients needing assistance to get out of bed now have three bars to limit the risk of harm.

"In December last year, Medsafe worked with the New Zealand based companies providing bed levers to ensure that updated warnings were issued to the healthcare professionals [working with those] using the devices.

"These warnings advised that high risk patients should be using the low risk devices - the three-bar bed lever rather than the single hoop bed lever."

Dr James said in another change, all new supplies of bed levers distributed by companies contracted by the Ministry of Health will now only comprise the three-bar version and the single loop bed levers are not being recirculated to patients.

He said New Zealand manufacturers are now also converting single loop levers to three-bar bed levers when these are returned.

"Medsafe's assessment is that a staged removal of single bar hoop bed levers is appropriate based on risk, with patients at higher risk having their levers replaced early in the process. Medsafe is working with suppliers on replacing the existing single bar hoops."

Dr James said the new Therapeutics Products Bill, which is currently being consulted on, proposes placing stronger requirements on manufacturers to ensure their products meet essential principles, such as safety, by meeting relevant international standards.

The proposed legislation will also provide for more active reporting of adverse events to Medsafe, he said.