Another fire broke out last night in the Nelson region, and while it was quickly dealt with, Fire and Emergency says it shows there's still a lot of work to do to contain the fire. 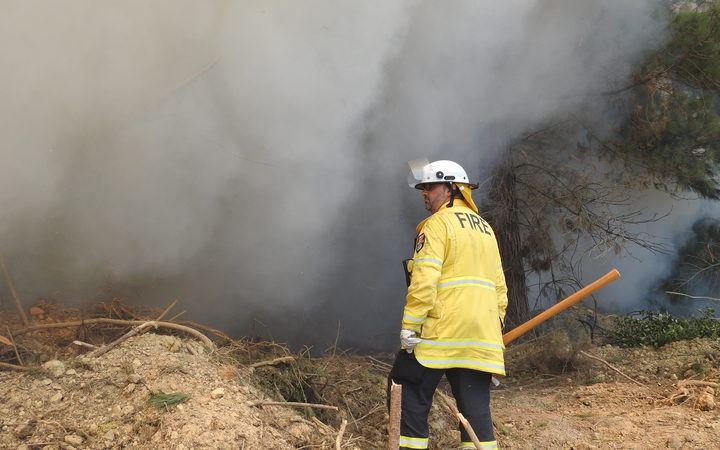 He said a fire breakout last night was dealt with quickly but there is still a lot of work to do and the fire is still not contained.

"This is the fire telling us it's still the boss."

He said a firefighter that was hospitalised yesterday due to dehydration is recovering well.

Risk assessment and a plan for conditional re-entry of 200 properties is a top priority, civil defence controller Roger Ball said.

Good morning everyone! There were some flare-ups overnight which firefighters on the ground managed effectively. We’re continuing to monitor the situation and will keep you updated on any developments during the day #NelsonFire via @NelsonTasmanCD

Police said they, along with the defence force and volunteers, visited three quarters of the households in Wakefield last night to hand out fact sheets and would return later this evening.

Wakefield has been declared safe with residents beginning to return home.

The number of animals at the Richmond A&P Showgrounds is now 300, down from the 700 housed there previously.

The animals have been cared for by a variety of organisations under tight security at the showgrounds, in stables, sheds, yards and inside make-shift fences.

MPI said they were not aware of any new animal welfare concerns.

A critical water shortage is looming for the fire's area of focus, the Waimea Plains and Motupiko, as drought conditions take hold, the Tasman District Council said.

Businesses connected to the council's reticulated network must cut their water use by 25 percent from next Monday 18 February, it said.

A spokesperson for the Dry Weather Taskforce, Dennis Bush-King, said tougher restrictions are essential to preserve the area's remaining water, until rain arrives.

He said a ban on most outdoor water use will apply next Monday, except for watering fruit and vegetables with a bucket or watering can, using recycled water.

And the union representing midwives has cancelled plans for a Nelson-Marlborough DHB strike in light of the emergency.

A spokesperson for MERAS, Jill Ovens, said the union recognises the stress that its members and the community are under.

A community meeting will be held at 7pm tonight at Hope Community Church.

Meanwhile, Wakefield business owners are counting the costs after the fire forced them to evacuate and shut up shop.