Many of more than 700 animals, including sheep, goats, dogs, chickens and turkeys, evacuated from areas threatened by the Tasman wildfire, are now on their way home. 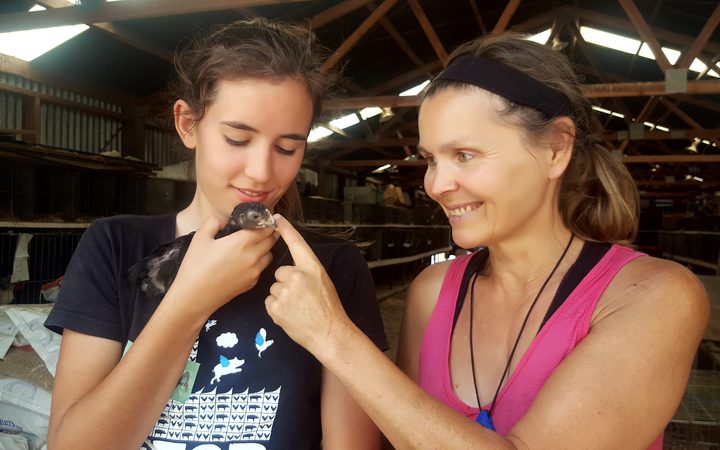 The animals have been cared for by a variety of organisations under tight security at the Richmond A&P showgrounds, in stables, sheds, yards and inside make-shift fences.

There is even a specially built run for free range hens.

RNZ dropped by the poultry area yesterday and learned from Louisa Young, who is in charge of the chickens, that the brown shavers are so happy they are even laying eggs.

She said it was important to make sure they had food, water and a place in which to scratch in the dust.

"And then they'll produce. Some were a little bit stressed when they came in from the fire, and the smoke.

"The biggest challenge we've had here is the heat, but today is not so hot and we've got fans going."

Ms Young said they had about 10 poultry families, some with up to 10 chicks and a turkey with four chicks.

"She had two when she arrived, and now has another two - she was sitting on eggs. It's actually been really amazing."

Helping her is 14-year-old science student Hana Sinclair, who has taken time off school to help care for the chickens and dogs.

She said being able to help meant a lot to her.

"Watching a fire burn part of New Zealand - you feel kind of useless and having something to do, and help out ... it's really good."

Ms Sinclair, whose focus is on biology studies, said she liked poultry as she felt she had a connection with the birds.

"I just love spending time with them, like they're dinosaur descendants, so it's kind of cool."

Ms Young said there were 150 birds in one room, 100 more in a barn down the road and another 220 free range hens in a large pen.

MPI said livestock, such as sheep, beef and dairy cattle will remain at the showgrounds until the fire risk has reduced, and the cordons are lifted in those areas which remain vulnerable.

Wakefield residents have been allowed back home, but Civil Defence said last night that cordons would remain in place in several key sites in Tasman, where the fire threat remains high.

He said owners were allowed restricted access but it would be some time yet before they can return home.