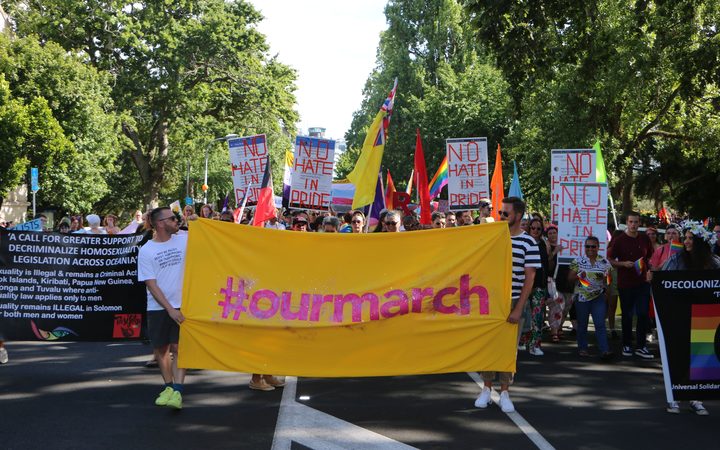 The colourful and cheerful group marched from Albert Park to Myers Park, via the city centre along Queen Street.

Organisers were expecting between 1000 and 2000 people, and more than 30 organisations to be involved.

One attendee, Ellen Sorkin, said it was a joyful celebration.

"The sun is shining, the sparkles are out, the glitter is on, the flags are out. It's fantastic."

After a tumultuous few months during which the Pride board survived a vote of no confidence, board chair Cissy Rock said the march was a show of solidarity.

She said she's "ecstatic" with how it turned out.

"It's very special. This is about us collectively standing together. This is what solidarity looks like."

She said it would always be a political event, and would not shy away from that.

"I'm proud that our community wants to stand up for the issues that are impacting on all New Zealanders, actually," she said.

"We're saying that racism, misogyny, transphobia and class privilege - all these things matter to us." 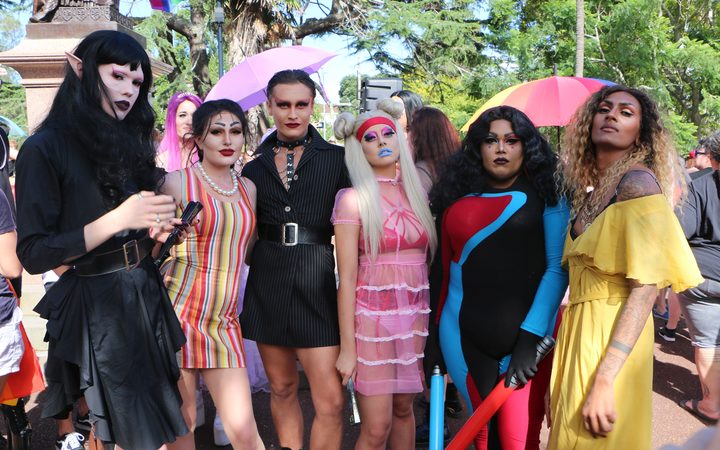 The march went ahead after a community fundraising effort raised tens of thousands of dollars. A number of corporate sponsors had pulled out following the decision to bar the police to march in their uniform.

Another marcher, Gigi Pikinga said it felt completely different from past years' parades, and they were more proud than ever to be involved.

They said the community has spoken on some serious, pressing issues that needed to be addressed.

"What I appreciated about this year's Pride was that it was the people standing with the people. There were no big corporate factors coming into play, dictating their version of what Pride should be," they said.

"It feels most authentic; back to its grassroots."

The march had rolling road closures as it moved, with police cars at the front and back guiding the group.

Ngāti Whātua Orakei's Sharon Hawke said the Pride movement was inherently political because many in the community have been, and still are, oppressed.

"This is a common place where the oppresed can come together. Those that are oppressed by racism, by capitalism, and by the fact of the diversity of lifestyle that we choose ... there's a common ground there to begin with.

"I think that if you look at any political movement, they need to look at the minority, those that are affected the most, who need to be helped first for the greater good."

Green MP Jan Logie led a delegation of the party's MPs and members.

"We are diverse. I'm a lesbian myself. Our communities are really in different places, and that means we've come to some hard conversations this year," she said.

"For me and the Greens that means it's all the more important that we are here to stand by those that are having the toughest time; that we are not going to walk away from them when the conversations get tough."

Harry Di Somma said the march was a strong showing of unity from the LGBTQI+ community.

"I think you really feel like you're part of the community when you do this.

"I think a lot of people don't realise that we are a community, and when we come together like this and everybody can see, we experience pride together," Mr Di Somma said.