A letter has emerged from heavy hitters in the fishing industry to fisheries minister Stuart Nash outlining "overwhelming opposition" to putting cameras on board boats. 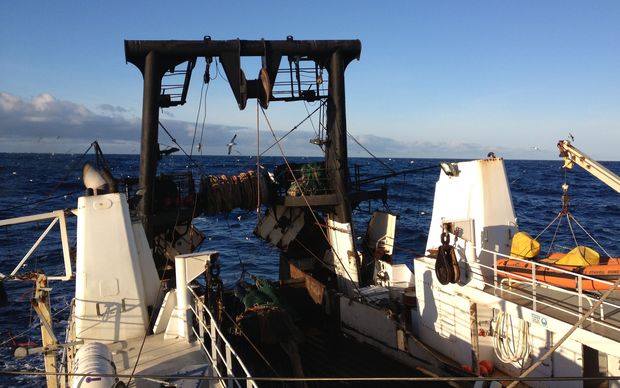 Forest and Bird says it shows that while some in the sector have been publicly happy to consider the idea, behind the scenes they have been fighting hard to make sure it never sees the light of day.

At the same time as the seafood industry was placing adverts on television last year proclaiming it had "nothing to hide", it was writing to the minister, Stuart Nash, expressing its "overwhelming opposition" to the idea of cameras on board its boats to monitor what they were up to.

The letter, released under the Official Information Act, said its purpose was to "dismiss any suggestion that the 'New Zealand Seafood industry' supports the current proposal".

For the removal of any doubt the words "do not support" were underlined.

Some of the signatories were redacted but amongst those still visible are managers at Talley's, Sealord, the Federation of Commercial Fishermen and Te Ohu Kai Moana, representing Māori fishing interests.

Forest and Bird spokesperson Karen Baird said it was a case of them saying one thing publicly while working towards a quite different outcome behind the scenes.

"Certainly when we've been sitting around the table talking about the roll out of electronic monitoring [cameras] and electronic reporting, they have certainly not been honest with us, telling us they support cameras."

One of the signatories, the head of Te Ohu Kai Moana, Dion Tuuta, said he did not resile from the comments and they were based on the camera proposal as it sat in July last year.

He said applying cameras to the current system would be problematic, especially if they were used to penalise fishers for failing to obey rules requiring them to discard some undersized fish.

"While cameras may be useful for identifying protected species that are accidentally caught like dolphins and such, the technology does not work to identify things like small fish size.

"So our concern at that time was [that] perhaps some of the promises that were being made were a little bit over inflated."

The proposed changes announced this week by the minister that could do away with the need to discard undersized fish could also make cameras more palatable to commercial fishers, he said.

"It's not necessarily an issue of wholesale opposition to cameras. It's about the sensible use of cameras."

Ms Baird said it was no good waiting for changes to be made to the sector before bringing in cameras and the two things must happen in tandem.

"The fishing industry need to come clean with the public and publicly state that they are 100 percent committed to having cameras on vessels because the way I look at that letter, it's clear that they are still going to try to wriggle out of it."

Fellow signatories, Andrew Talley, Sealords and the Federation of Commercial Fishermen declined to be interviewed but released statements saying their position in the letter was consistent with the position they had taken publicly on cameras that the imposition of cameras across the entire fleet was "potentially unworkable."