The wife of a dying cancer patient laid the blame for poor cancer care nationwide at the feet of the health minister in Wellington today. 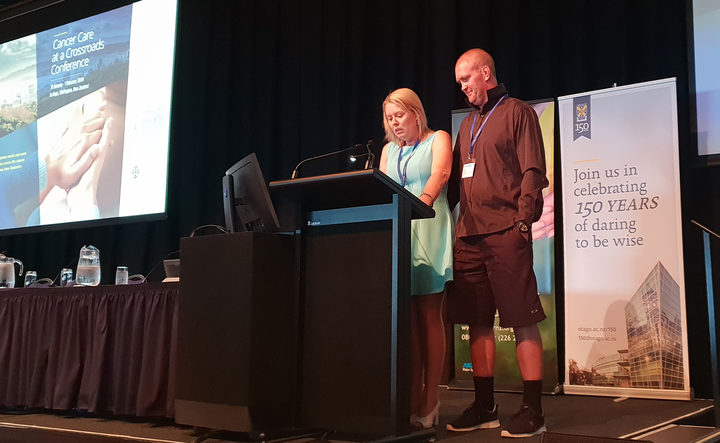 Melissa Vining fought back sobs as she told 400 cancer specialists in Wellington what her family has been through after her husband's terminal bowel cancer diagnosis. Photo: RNZ / Karen Brown

Winton man Blair Vining, 38, was diagnosed with terminal bowel cancer in late October, and given six days to live.

Melissa Vining fought back sobs as she told 400 cancer specialists at a conference in Wellington today what the family has been through and why no-one else should face that.

"The prognosis of stage four cancer that has spread to all segments of your liver doesn't get cured. No surgery, no cutting out pieces of his liver, not able to give him my liver, no immunotherapy wonder drugs. No cure," Melissa said.

She said she made 19 phone calls one day seeking urgent help when her husband was at his lowest ebb and waited 13 hours in hospital to be flown for care in Christchurch.

Blair, a former Midlands rugby player and coach and father of two teenage girls, told the conference he was not seeking sympathy.

He said the All Blacks had plans, but not the government when it came to dealing with the biggest killer of the population.

"I was urgent, I got told I would be seen in one to two weeks. [Then] I received a letter in the mail saying six to eight weeks is the true timeline because Southland District Health Board is six to eight weeks behind, because there is the biggest bowel cancer backlog in the country."

He said getting a national plan was on the bucket list he and Melissa were working through now.

He said instead results for patients varied depending on where they lived, their ethnic group and cultural and socio-economic factors.

He also hinted at a lack of ownership of the problem.

"Unfortunately we invited every member of the health select committee and spokesperson to any part of this meeting, including the opening in our own backyard, and we had responses from two: The minister and one other. That could potentially reflect part of the problem."

Dr Clark said a plan was clearly needed and he had instructed the Health Ministry to begin right away.

"There is widespread agreement that we need stronger leadership of our cancer control," Dr Clark said.

"At the same time the Ministry of Health has become better placed to provide the stronger stewardship and leadership of cancer prevention and control and delivery of better outcomes at the national level."

The head of the Ministry, Ashley Bloomfield, said they were starting work this week on a plan that would take account of how patients access care locally and wider issues.

"What we need to do nationally to determine specific standards of care, expectations and to monitor the experience of people as they go through the system, to monitor their access to care, the process of care and the outcomes of care."

Systematic improvements to care must also be part of the plan, he said.

Dr Bloomfield said he intended to have an interim plan ready in late June.