Conservationists in the Far North are concerned about the disappearance of freshwater streams from Ninety Mile Beach. 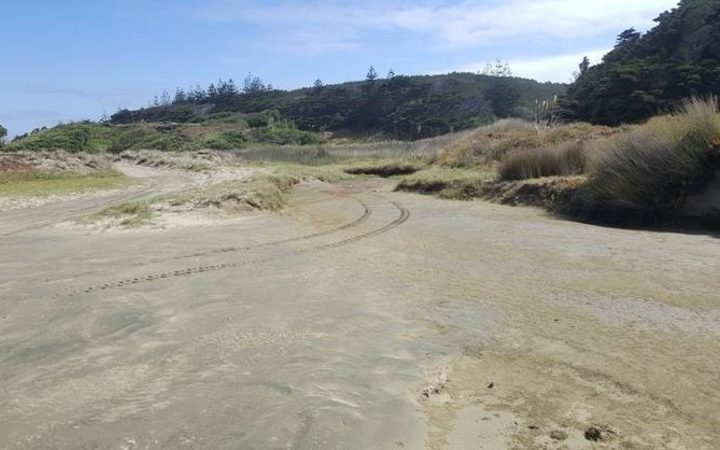 They said there were previously dozens that ran from the dunes to the sea, sustaining shellfish and birdlife.

But the last one still running has now dried up.

Bushland Trust chairperson Kevin Matthews said when he was a boy in the 1960's the southern half of Te Oneroa-a-Tōhē (Ninety Mile Beach) was criss-crossed by more than 60 freshwater streams.

"Up to Scott Point there were 63 streams that you'd cross; you'd count them as you drove north up the beach. In that stretch between Waipapakauri and just north of Hukatere, all those streams have stopped running."

That was before much of the northern tip of New Zealand, the long, sandy Aupōuri Pensinsula, was planted in pine forest.

In those days there was freshwater and wild kai in abundance, Mr Matthews said.

"We used to camp at the beach, at the Karaka Stream, used to catch eels there. You could go and get a feed of toheroa [shellfish] without a problem.

"It wasn't only the streams; it was freshwater flowing under the sand."

But when Mr Matthews visited the old camp site this summer, the Karaka Stream was gone and the toheroa had all but disappeared.

Northland Environmental Protection Society president Fiona Furrell said that was to be expected.

She said the pine forest would have sucked up some of the water that once ran onto the beach but the trees have been harvested in the last two years and the streams had not come back.

The disappearance of the streams could only be down to two things: either the Aupōuri aquifer had dropped or draining wetlands for swamp kauri and avocado orchards had dried the streams.

"If you look on Google Earth, you will see just about every wetland drained, and drained to the east coast," Ms Furrell said.

"We can see that but we can't say it's the sole cause."

Aupōuri Forest land was returned to iwi in a Treaty of Waitangi settlement on condition they replant it.

However, he shared the conservationists' concerns over freshwater.

"It is a dry, sandy peninsula with 20,000 acres of forest on it that wasn't there 40 years ago, and we've got a whole lot of orchardists now finding opportunities in the far north now.

"I think that would definitely add more pressure on the resource."

Mr Piripi, who also chairs the combined iwi and Crown governance board for Te Oneroa-a-Tōhē, said he believed it was time for a stocktake.

The government should fund a comprehensive, scientific study of the Aupōuri aquifer and the complex hydrology of the peninsula, before it was too late, he said.

"We'll need an expert hydrologist and a team to give answers to the people of New Zealand on why we have allowed 63 streams to disappear off one of our iconic beaches."

RNZ has sought comment from the Northland Regional Council and the Department of Conservation.