Auckland City Mission has had to turn away hundreds of families lining up for Christmas food parcels across its three sites, as demand outstrips supply. 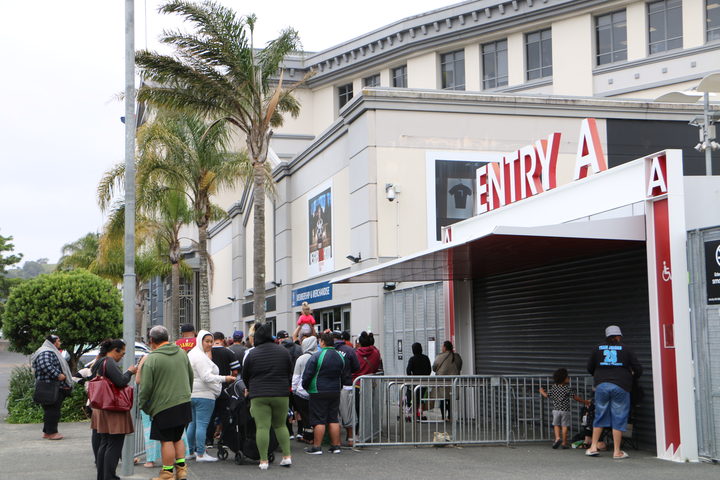 The Mission is in the midst of its Christmas Drive, which is operating out of Eden Park, Ngā Whare Waatea Marae and Papakura Marae.

People have been queuing through the night at Eden Park in the rain, from as early as 6pm last night, Missioner Chris Farrelly said.

So far it has handed out about 5000 parcels, many for families of four or more, which is well above what was given out by the same point last year.

"By the end of the week, we expect it have doubled last year."

Mr Farrelly said despite doubling its Christmas efforts this year the Mission cannot process everyone.

Yesterday, about 400 people were turned away.

"It's been quite overwhelming and shocking for us to see just the volumes of people."

It is mostly mothers and grandmothers lining up for food, he said.

"This highlights again that there is significant food poverty in our country - we're seeing here, at the moment, the real hard end of it."

It's disturbing and painful not being able to give people what they need, he said.

"We begin to realise the reality of people's lives, this is not a sham or trying to get something over and above, this is just basic needs people are wanting."

He said Work and Income is also on site processing special needs grants.

"They've been incredible, they are right behind us and supportive," he said, adding that the Marae are also providing an invaluable service.

"The way the Marae have been wrapping around their people is absolutely heartwarming - there is real manaaki and action."

The Mission is urgently seeking financial donations, so it can continue its drive through to 14 January.

Meanwhile, the Christchurch City Mission expects 1000 people to be getting its food parcels this Christmas season.

It's been attracting queues of up to 100 people, with volunteers saying they are serving far more customers than this time last year.

Missioner Matthew Mark is concerned the Christchurch City Mission could run out of food in coming weeks.

He said they do not have any reserves and January can often be a tougher month for some families.