More than $2 million in bets had been made in New Zealand on today's Melbourne Cup race by midday - up $500,000 on the same time last year. 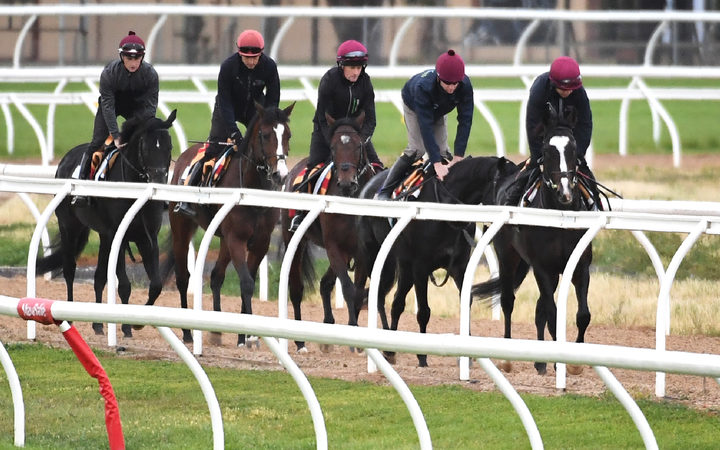 Favourite Yucatan leads stablemates during an early morning run at the Werribee racecourse on the outskirts of Melbourne. Photo: AFP

Twenty-four horses, including two New Zealand-bred, will compete in today's race over 3.2 kilometres.

There are also three Kiwi jockeys in this year's Melbourne Cup and a TAB bookmaker says New Zealanders keener than ever on the annual race.

TAB bookmaker Mark Stafford said it had been a strong start to the betting day.

"We're tracking at about $2 million turnover on the Cup so far, expecting to get over 10 come race time, and it's about half a million ahead of the same time last year and I think that's probably due to the strong Kiwi connections with trainers and jockeys involved in the race."

Mr Stafford said people are betting on this year's favourite, Irish horse Yucatan ridden by New Zealand jockey James McDonald, but that could change with the weather.

"I do feel like the favourite this year is well worth a look... It'll be massive if James can win this," Mr Stafford said.

"Michael Walker is another New Zealand jockey who's got a ride, there's a few New Zealand trainers of course Chris Waller who trained Winx who's arguably the best horse in the world - he's got three in here including Youngstar which is probably one of my top three or four horses as well.

"So lots of Kiwi connections. In recent years it's all been the Northern Hemisphere that's grabbed the headlines but there's a bit going on."

Veteran horse breeder and owner of Zacada, Sir Patrick Hogan, said he was hoping for rain to give his horse the best shot.

"If we get rain and the track cuts up a bit, well there'll probably be other halfs it will suit the field, including my horse, the track conditions at the time will certainly have an effect one way or the other on the 24 runners in the race."

Two New Zealand-bred horses are also in the race - Zacada and Who Shot Thebarman.

There is $NZ7.9 million in prize money available for the winner of today's Melbourne Cup race.

The New Zealand Racing Board put together some fast facts on Kiwi contenders in this year's Melbourne Cup.

Based in Cambridge, Murray Baker is the greatest horse trainer New Zealand has ever seen. He's won a total 48 Australasian Group 1 races, including a Caulfield Cup in 2015, but so far the big one has eluded him. Baker won a Caulfield Cup with Mongolian Khan in 2015 and among his many other successes trained The Phantom to a respectable second place in the 1989 Melbourne Cup. Zacada is part owned by legendary breeder Sir Patrick Hogan and has drawn the dreaded barrier 24.

Legendary Kiwi jockey Lance O'Sullivan raced in seven Melbourne Cups and came frustratingly close to winning in 1985 on Koiro Corrie May. Back then it was the first year the Cup was worth a million dollars and he went down a short head to the New Zealand bred What a Nuisance. Thirty-three years later, O'Sullivan is in running for the Melbourne Cup again, this time as a trainer. SIr Charles Road is owned by New Zealand businessman David Archer and has drawn barrier 14.

Kiwi Mike Moroney spent his first 18 years training in New Zealand before setting up a trans-Tasman stable in Australia. He decided he would take on Australian racing in 1999 and since then has won a host of major races including the 2000 Melbourne Cup with Brew. Moroney has two runners in the race, Vengeur Masque has drawn barrier 2 and Sound Check has drawn barrier 16.

At just 26 years of age, James McDonald is among the greatest Jockeys out of New Zealand. With more than 34 of Australasia's greatest races under his belt, McDonald is hot property on the Spring Carnival Scene. McDonald was just 19 years old when he came second in the 2012 Melbourne Cup aboard the Gai Waterhouse trained Fiorente. Yucatan's incredible run in the Caulfield Guineas secure his place as the favourite in the Melbourne Cup. He has drawn barrier 23.

Michael Walker (A Prince of Arran $17)

Born in Rotorua, Walker was seriously injured in 2008 while pig hunting in Taranaki when he fell down a 10 metre high bank. He suffered serious head injuries and after a long stint of rehab returned to racing. He snuck into the Melbourne Cup field on Derby Day when he stormed home aboard Prince of Arran which has drawn barrier 20.

2014 Auckland Cup winner owned by Whanganui dairy farmers - the O'Leary brothers: Dan, Michael, Shaun and Humphrey, Who Shot Thebarman is trained by Chris Waller. This will be the 10-year-old's fourth tilt at the Melbourne Cup after finishing third in the 2014 edition of the great race. Who Shot Thebarman had drawn barrier 18.