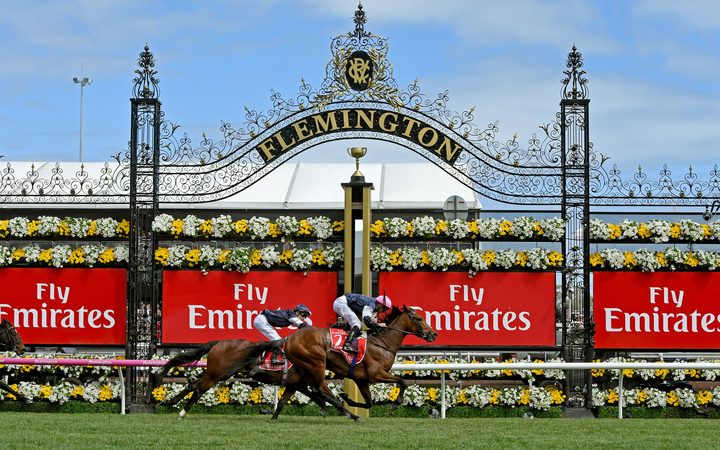 In fact, the phrase is a relatively recent addition. It comes from the title of Sydney-born writer Vivienne McCredie's poem from 1986:

"But once a year at Flemington

A horse race stops us all

And we hold our breaths and listen

To the commentator's call

For never has there a race

That holds such fascination

That the race they run at Flemington,

The Race that stops the nation."

The poem, the original of which now sits in the National Library of Australia, goes on to name check Australian icons like cricketers the Don (Don Bradman) and Denis Lillee, golfer Greg "The Great White Shark" Norman, Fosters beer, the Wallabies and Kangaroos and the Sydney Harbour Bridge.

So far, only the Melbourne Cup reference has lived on. It was first read on an evening poetry radio programme and then printed.

The Melbourne Cup is a horse race. The day has been a public holiday in Melbourne since 1877. It is run over 3200m for horses aged three years old or over. The cup is raced at 3pm (5pm NZ time) on the first Tuesday in November at Flemington Racecourse in Melbourne.

Lloyd Williams, the owner of six cup winners, has called for the day to be a national public holiday. Williams is going for seven wins this year with Irish-trained stablemates Yucatan The Cliffsofmoher.

The favourite wins the cup about one in five times, although they do often place.

More Australians take sick leave on the day after the Melbourne Cup than at any other time, and analysts say it costs the country more than a billion dollars in lost productivity.

But in 2017 the carnival attracted more than 100,000 interstate visitors and contributed $A225m in new tourist dollars.

Australians are expected to place more than 35 million individual bets over the four-day Melbourne Cup carnival.

Since its first running in 1861, the cup has generated its fair share of tales. The Conversation reports on one particular occasion that grabbed headlines:

"Months before the race, Ballarat publican Walter Craig had a vivid dream. In this dream he watched his own horse, Nimblefoot, win the Cup, but he noticed his jockey was wearing a black armband. Craig's premonition was that his horse would win the Cup, but that he would not live to see it. So strong was his conviction that the story gained great currency and was reported in the press before the Cup was run (this is verified by the Trove newspaper database). Astonishingly, Craig's horse Nimblefoot won the cup, with the jockey wearing a black crepe armband to mourn Walter Craig who, just as he had dreamed, died before the race."

I think this is my favourite picture from today. Just now. #MelbourneCup pic.twitter.com/LnbY4Oc9In

The 1890 Cup was won by Carbine. More importantly there is a photo of Carbine just about to cross the finish line, making it one of the first live photos of an action moment and the crowd reacting to the win. It is a significant photo in terms of the history of photography.

But buried deep in the crowd, another moment has been captured, The Conversation reports. Someone is picking the pocket of a race-goer, a practice known as dipping.

It is important to remember that the Melbourne Cup comes during a long day of racing at Flemington. It can be hot. Punters are wearing their Flemington best. It's a holiday. So what else can a punter do but have a cheeky beer or wine to keep hydrated. The inevitable happens.

While cameras linger on the extraordinary horse flesh, the perfect suits and the fabulous fascinators, there will be scenes of carnage elsewhere.

Two years ago, the ABC, Australia's national broadcaster, asked readers to volunteer what they didn't like about the race. Jodie K gives a taste of the reaction:

"I worked for a few years as a bar attendant within the corporate 'birdcage' [which] represents all the most noxious parts of colonial, consumerist, corporate, misogynist and small-minded Australian culture. If an alien came to Melbourne and wanted to understand the where we need help as a culture, I would take them to the Melbourne Cup. Excessive consumption. Sexist beauty standards and rigidly policed gender boundaries. Class divide and corporate culture. Binge drinking. Animal abuse and exploitation. Sexual harassment. Anti-intellectualism and attention-seeking. Littering and total disregard for the environment. And I haven't even mentioned the gambling yet."

"Australians drink the equivalent of 25 million swimming pools of alcohol between breakfast and dinner on Cup day."

I support projecting images of drunk people at the Melbourne cup onto the opera house pic.twitter.com/ndukNCfPLJ

Closed on Cup Day, Tuesday, 6 November.
Float away all the tired aches an pains we get from standing in heels at the races. It's also one of the best known ways to soothe a hangover. #melbournecup #races #spring #hangoverremedy #hangovercure #cupday #springcarnival #melbourne pic.twitter.com/NiK46BLupg

Fashion became a Melbourne Cup staple in 1962 with the debut of Fashions in the Field. It stopped in 1971 during a cash-strapped economy

Each year the Department of Internal Affairs reminds Kiwis of the rules of running a sweepstake on the Cup. For those about to run a sweepstake, here they are: