The Duke and Duchess of Sussex have received a powerful powhiri in Rotorua, on the final day of their New Zealand tour. 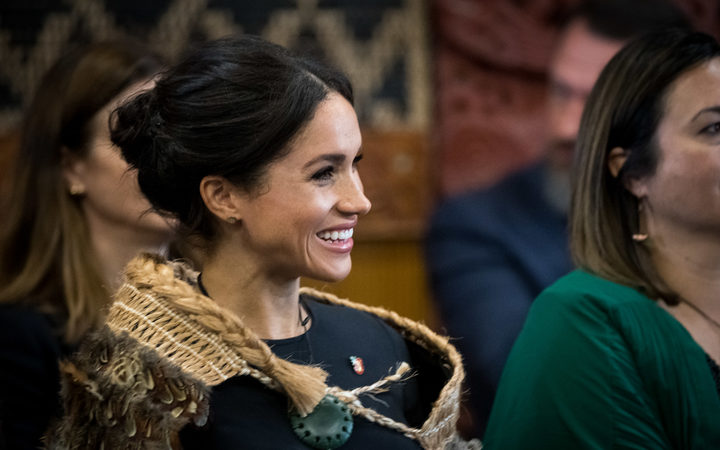 After several days of drizzly weather around the country, the sun was shining as their Royal Highnesses were welcomed on to Te Papaiouru marae.

Both Prince Harry and Meghan were adorned in korowai, with the Duchess' woven by Te Arawa weaver Norma Sturley.

The couple were also wearing ponamu necklaces gifted to them by the Governor-General Dame Patsy Reddy earlier in their trip.

Meghan's was designed by Kiri Nathan and carved by Jason Nathan.

Watch a video of the rousing welcome here:

Hundreds of invited guests, including school children and kapa haka performers, lined up on the marae atea to welcome the Duke and Duchess.

Accompanying Prince Harry during the powhiri was Trevor Maxwell, a long-time Rotorua councillor and kaumātua.

The Duke accepted a wero, before they were taken inside the wharenui, Tamatekapua.

Te Arawa whānau stood up as the Royal couple made their way in.

There was a bit of a delay as guest took off their shoes - as it's Māori custom not to wear footwear inside the wharenui.

He also gave a special shoutout to Meghan's 'bub' in his welcome.

In his speech for the hau kāinga or locals, Te Kanawa Pitiroi acknowledged Prince Harry and his 'beautiful partner' Meghan.

He compared her beauty to that of Mt Pihanga - the famous Māori legend which saw Mt Taranaki and Tongariro. 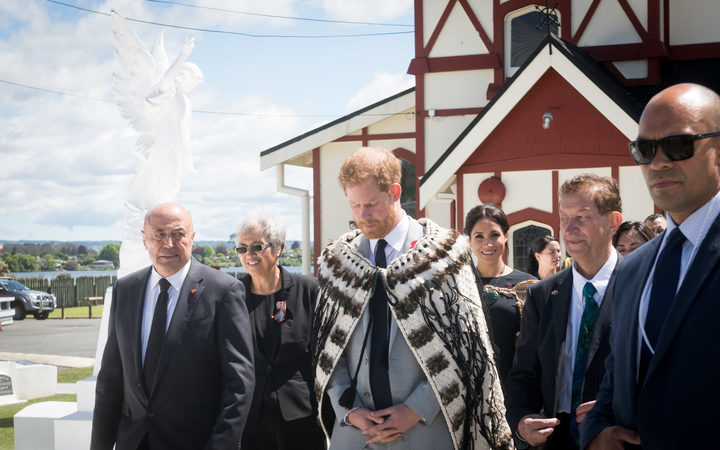 He also spoke of the time Queen Elizabeth visited Rotorua in 1954 when he was 15 years old.

There were cheers as Prince Harry opened his address to Ngāti Whakaue in te reo Māori at Tamatekapua.

His clear and strong pronunciation in his greeting drew even more applause.

Prince Harry said he was pleased to be spending time at the edge of the lake and with the people of Te Arawa.

"Thank you so much for the beautiful cloak you have gifted myself and the duchess."

He said the great skill and aroha which went into making it would see it as a treasured Taonga in their family.

He then led the waiata himself, singing all of the words to Te Aroha in te reo.

Te Arawa leader Trevor Maxwell joked he hoped Prince Harry didn't lend the English rugby team the tewhatewha when they played the All Blacks at Twickenham.

Meghan also received a bouquet of lily of the valley flowers from Mr Maxwell's mokopuna Atareta - the same flowers Meghan had at her wedding.

The two shared a hongi as Meghan shared a few words with her.

After a final karakia the royals then made their way out of Tamatekapua to attend their luncheon.

On their way to the dining room, the couple stopped to speak with school children.

The children had waited patiently in the hot sun and as soon Duke and Duchess appeared the Ngāti Whakaue Senior Kapa Haka began a performance.

The Duchess accepted a kiti from a Rotorua Primary School student.

The royal couple have had a chance to see the steam boxes outside the wharekai where some of their lunch is being prepared.

Kuia Rene Mitchell, the sister of the late Sir Howard Morrison, is giving the royal couple a demonstration on how to make a steam pudding.

Before their lunch, the couple also met Karena and Kasey Bird - 2014 MasterChef winners, who prepared the menu.

The royal couple have now moved from lunch into Te Ao Mārama.

They were accompanied by Kuia Norma Sturley and waved at the school children who were still outside.

Outside some of the kapa haka performers took the opportunity to pose for photographs with the police motorbikes for the motorcade.

Member of the Ngāti Whakaue Senior Kapa Haka roopu Lauren James said it was a real privilege for them to perform during the luncheon.

"We represent not only this marae but the people of this land."

She said the royal couple looked like they had enjoyed the performance.

"What we've seen today is a couple who are willing to engage with and learn about different cultures.

"To have a royal couple like that come here, its very exciting and we couldn't have asked for a more picturesque venue here beside the lake and with such amazing weather."