The Duchess of Sussex has proved herself to be a master gumboot-thrower, beating her husband Prince Harry by about a metre in a rain-soaked contest on Auckland's North Shore. 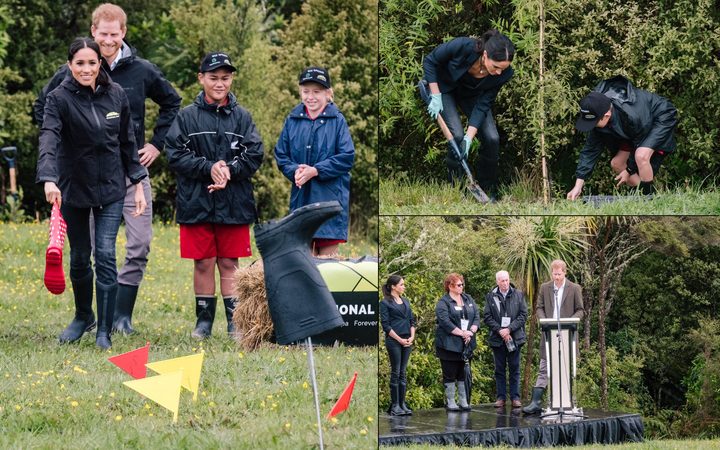 Tree planting and gumboot throwing were on the schedule for the Royal couple today. Photo: Supplied / Kensington Palace

Donning black gumboots - not the iconic Skellerup red bands - their Royal Highnesses have planted native trees and learned more about local conservation efforts in an area of native bush that is now part of the Queen's Commonwealth Canopy.

But Auckland's weather wasn't cooperating with the outdoor event - the rain came down and the umbrellas went up as the couple were welcomed with a powhiri, which included a waiata, E Toru Ngā Mea, from children from the local Pinehill School.

Queen Elizabeth II Trust chair James Guild said he was delighted to welcome Prince Harry and Meghan, and he congratulated them on their pregnancy.

Despite the rain, the Duke said he and his wife were delighted to be there.

The Duke said the QCC was a cause close to both his and his grandmother's hearts and New Zealand had been one of the first countries to join the initiative, and since then had registered more than 4500 covenants.

"When you think that each of those covenants is enabling the protection of important areas of biodiversity on private land - that is a huge achievement and one that deserves recognition. And as I learned in the car there are no incentives; farmers are doing this because it's the right thing to do," he said.

After unveiling a plaque, the couple met some of the children.

Donning green gardening gloves, their Royal Highnesses were joined by two school children to plant native trees, which had been selected for them by the children.

Prince Harry planted a puriri tree, which is indigenous to the northern part of the North Island.

Meghan planted a kōwhai tree, which was chosen because it featured on her bridal veil.

With the trees planted, it was time for the main event - the gumboot throwing competition.

The children had the first throws, showing the couple how it's done.

The children cheered the Duke and Duchess on as they stepped up to the mark for their throws.

Each throw was marked with a yellow or red flag.

Prince Harry threw a blue spotted boot and Meghan a red one.

It turned out that Meghan had a better technique than her husband, with her gumboot landing a metre past her husband's.

She won a gumboot-shaped trophy, while Prince Harry demanded a re-match.

Sione Naufahu, 11, said it was great to be working with the Royal couple as a team and cheering them on.

"It was really fun."

Sione was on Prince Harry's losing team, but he said that was alright.

Sione said he gave Prince Harry some gumboot-throwing advice, telling him it was best to use an underarm technique.

Both Sione and Nelson are part of Trees for Survival, which is an environmental education programme for young people.

Nelson said he's been part of the group for two years, but this was the best thing he has been involved in, and it was fun meeting the Royal couple.

Alex Chatterton, 11, planted tree tree with the Duchess said she asked him why he wanted to plant the tree and said "let's get started" and offered him gloves.

He described the royal pair as "nice, caring".

Meghan's team beat Prince Harry's after the Duchess lobbed her boot about a metre further than her husband.

Ryen Anderson, 10, was on Meghan's team. She said Prince Harry told the group he would win next time the couple competed in the sport.

Isabella Iti said their Royal Highnesses "looked like they were really trying to throw the gum boot as far as they could".

"There wasn't too much of a rivalry. I think she was thinking that there was no chance that she would win. But she did."

Emmy Hurcun, 11, said she talked to the Royals about conservation and how important it is to plant trees and protect the environment.

"It was a once in a lifetime experience, it was really amazing and I was just blown away with how nice they were."

The couple were gifted a pair of green and blue gumboots for their future child.

Meghan was gifted a greenstone necklace, which got caught in her pony tail.