Women with advanced breast cancer petitioned Parliament today to fund two new drugs that would give them more time with their families. 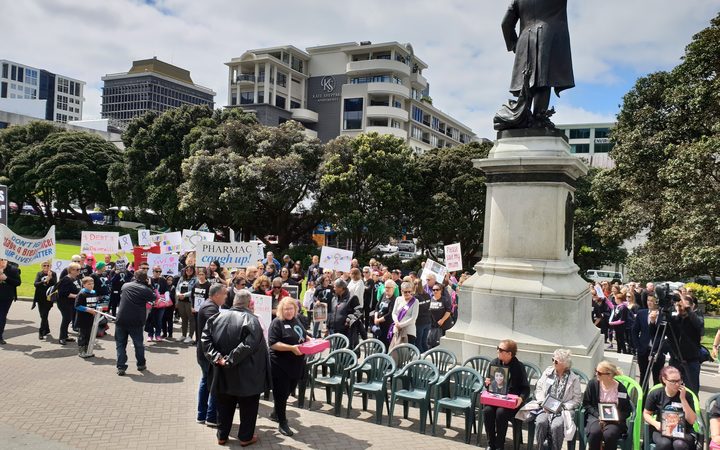 They delivered petitions with 33,500 signatures urging Pharmac to fund Ibrance and presented more than 2600 signatures to make Kadcyla available.

The women, calling themselves Metavivors, were supported by friends, family, and others, amid claims that their plight was unfair and a disgrace.

Mother-of-three Wiki Mulholland, 40, was diagnosed with breast cancer in May.

She was told initially that it was early-stage cancer and was preparing for a mastectomy when it was discovered the cancer had already spread.

"I was actually unfortunately told that it was too late," she said.

"It had already spread to my spine, so I have the spread throughout my spine and in my chest and in the base of my skull. That was the end of May this year."

Ms Mulholland is on chemo but has cashed in her KiwiSaver in case she needs to buy Ibrance.

She knows she can't ultimately beat the cancer, but she is determined to fight back. 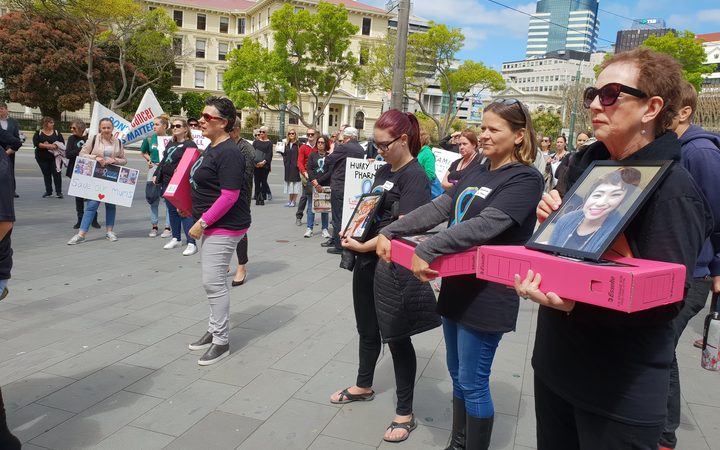 She had been told she should be on Ibrance but can't afford it and hoped to manage on other funded drugs instead.

She said the drug would give her more time with her children, aged three and five.

"It would mean a lot for them and for my family as a whole, you know, getting to raise them, and instilling values that I think are important, just watching them grow up like people in their thirties do, you know?"

A Dunedin-based mother, Claudine Johnston, said the Health Minister, David Clark, must step in and take action to ensure the drugs were funded.

"I'm here to beg David Clark to keep his pre-election promises to be a kinder, fairer government, to make cancer treatment more accessible and fair and more equal."

The head of the Breast Cancer Foundation, Evangelia Henderson, said women and others should not have to mortgage their homes or beg to get the drugs.

"It's a disgrace that we are so far behind the rest of .. other countries like us, comparable countries where these drugs are available, yet in our country women have to make those decisions, very difficult decisions, and that is heartless."

The chair of the Beast Cancer Aotearoa Coalition, Libby Burgess, said it is time for a review of Pharmac.

On whether the Government has sufficient money in its kitty to boost the Pharmac budget, she said: "There doesn't seem to be a particular lack of money it's just that the system has been set and it hasn't been changed or reviewed for 25 years.

"So today we're going to be calling for a review of the Pharmac system, to make it more humane, to make it actually deliver results."

The Pharmac chief executive, Sarah Fitt, said the drug-buying agency was considering funding both the drugs, but must first ensure that they would deliver the expected benefits.

She added the agency's $1 billion budget must be used to the best effect of everyone.

MPs from several political parties met the protesters on the forecourt of Parliament to receive the petitions.

They did not include the Health Minister, David Clark, who met with some of the petition supporters later privately.

Dr Clark reiterated to journalists at Parliament, however, that he does not believe it is right for politicians to second-guess Pharmac decisions.