The kererū has swooped to victory in the Bird of the Year competition for the first time. 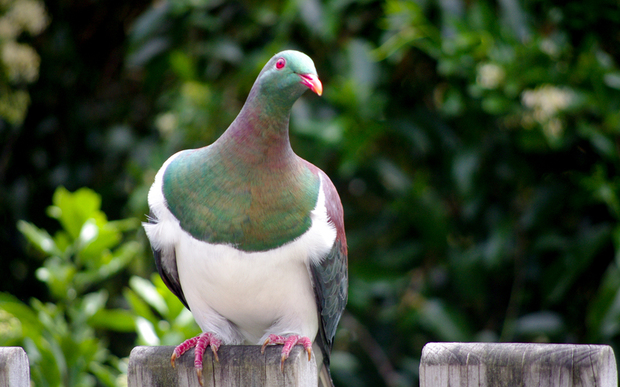 The kererū held on to its early lead to take the bird of the year title. Photo: WCC / Jan Kench

Amassing 5833 votes, the wood pigeon held on to its early lead despite strong challenges from the kākāpō and the kakī.

The kākāpō was runner up with 3772 votes and the kakī (black stilt) came in third with 2995 votes.

The kererū population is classed as stable overall, but it is in danger of becoming locally extinct in some areas where there has not been sustained predator control.

The fate of many forests is linked to that of the kererū, as it is the only native bird big enough to swallow and disperse the large fruit of karaka, miro, tawa and taraire, competition organiser Forest & Bird says.

Team Kererū campaigners, who included Green MP Chlöe Swarbrick, focused on the bird's size and appetite, sparking some online rivalry over which native bird is the roundest.

I've seen them gobbling down loquats. Those berries don't stand a chance. pic.twitter.com/lNqhxyEzoY

Back from hiatus! This week, I report on NZ's annual #BirdOfTheYear contest, why the birds of #NewZealand are so special, why they're disappearing, and why I voted for #TeamTakahe, the roundest boi, the absolute unit of NZ birds.https://t.co/iVq7W8o4dS pic.twitter.com/FkBM8mUHcp

The competition prompted celebrity endorsements from Stephen Fry for the kākāpō, and from comedian Bill Bailey for the takahē.

Bird of the Year also featured on Tinder for the first time, with Shelly the kakī (black stilt) attracting 500 matches across New Zealand.

We're backing the #greywarbler #riroriro for #birdoftheyear - we've always been quite partial to those with grey hair and an innate musicality. @birdoftheyear pic.twitter.com/kYlXMDNMO8

This year's contest wasn't immune to a bit of attempted foul play, with Forest and Bird discounting some last minute fake votes for the kakī (black stilt). IP addresses in Australia had sent through over 300 votes for the shag, and then over 1500 for the kakī.

We are aware of the attempted fake votes that came in for kakī over the weekend but have processes in place to ensure they won't be counted in the final result. Check https://t.co/cjN6uY9V8y at 9am tomorrow for the official results. #BirdOfTheYear https://t.co/NCYS8BGNEP

It's true!! We have passed 800 votes
That means we are nearly at 1000, and have already passed our total from last year.

Last year's winner was the kea, and previous titleholders include the fairy tern and mōhua.