The cost to repair one of the country's largest leaky buildings continues to skyrocket by millions of dollars as anxious owners wait for their day in court. 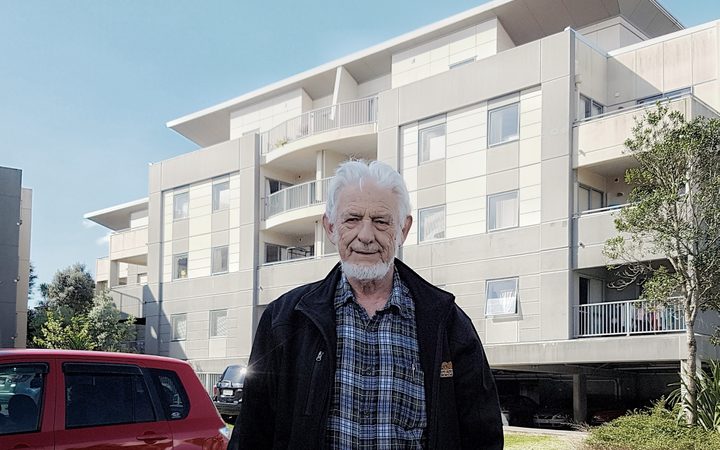 St Lukes Garden Apartment complex was built between 2003 and 2011 and its defects and leaks have become a serious problem.

The 285 owners are taking a claim against the Auckland Council and 15 other defendants.

When RNZ first met Bill Bennett in 2016 the estimated cost of repairs was around $60 million.

Defects include cracks in concrete panels, and areas failing to comply with structural or fire safety requirements.

The bill has now jumped to more than $80 million and could grow as they prepare for court.

"There are ranch sliders where moisture is coming in, there are actual walls where water is coming in, both through the cracks and from the upper level from the decks of the apartments up the top.

"The water is coming down the walls between the inner lining and the concrete tilt slabs and coming through the expanding cracks. The cracks are getting larger."

Repairs won't start until their court case is finished, so in the meantime they have only patched up to stop the worst of the mould.

"It has impacted a lot of people, distressed quite a few people.

"It certainly has ruined, using the term we use round here, quiet enjoyment. And then of course there's the stress of not knowing how soon the repairs are going to take place."

The investigation has been long and thorough and is only now reaching its final stages.

"We started this process in 2014, it's now 2018 so it's four years to get to this point and we're not likely to get to court until sometime next year I think June or somewhere near that time.

"It's all gathering technical information and if there's more defendants then it becomes a longer process ... the defendants of course need to have their chance to review and inspect the evidence.

Just recently dangerous mould was found under the carpet of four apartments and yesterday defendants and their experts were busy collecting their own evidence on site.

Alongside the claim the complex is also having to design its repair work.

"It'll look entirely different because there'll be a facade on it, there'll be a different facing on it ... the outside balconies will not exist ... therefore the building will look quite different and quite frankly it'll be a new building.

All going well he said things could get underway late next year.

"You put your life on hold. You can't decide whether you can afford to go on an overseas trip because you're never quite sure what's going to come in from left field.

Some have sold and cut their losses but Mr Bennett said the last apartment went for around $250,000 - well below the $600,000 he said they should be worth.

"They realise they're probably not going to be able to maintain the cost."

He said the repair programme could last five to seven years.

That means for many owners more than a decade will have passed between finding out about the problem and getting it fixed, and more than two decades since buying their apartment 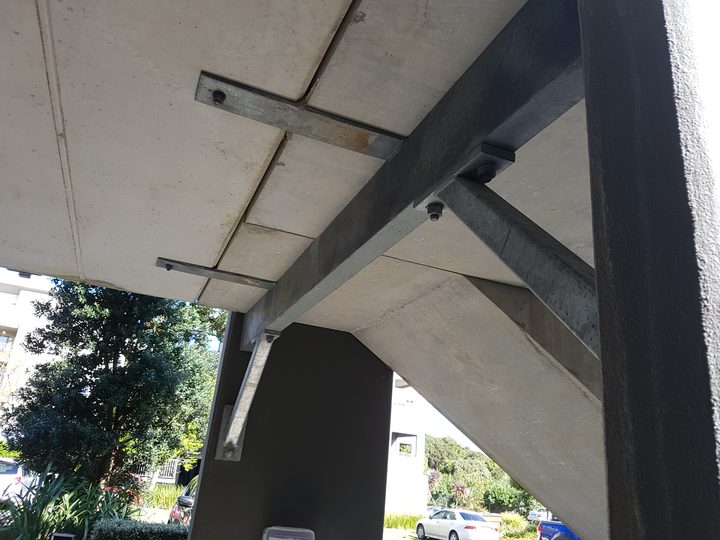 Metal bracing under the house of an apartment in St Lukes, Auckland. Photo: RNZ/ Tom Furley

Don Milne, 82, and his wife bought their apartment five years ago to live out their retirement.

Less than six months later the faults were discovered.

"We checked everything, we checked the whole lot; the body corporate records, the minutes, we checked the LIM. All the things you do, our lawyers went through everything. We thought "great we're buying into a decent complex"... and then the bottom fell out of it. So we've lived with that for at least four years and will be living it for the next four, five, who knows.

While their apartment has escaped water damage, being at the top of the building, he will still have to move out while the repair work is done.

"The thought that in three to four years we're going to have to shift out for a year - 14 months, find somewhere to go to, and find the money to pay for all this ... it's pretty stressful for a retired couple.

"It's not a matter of daily conversation or anything like that but it's there, it's constantly there and you know it's going to cost us money.

"It will be the largest litigation in this field by far and probably the largest repair cost currently sitting in the 80 million mark but you've got to remember it's a lot of buildings," its chief executive Roger Levie said.

Since 2008 more than 13,000 Auckland dwellings have had weathertightness claims.

"We're certainly no more 15 to 20 percent of the way through the problem across Auckland and New Zealand so any thought that that's an issue of the past is wrong. That's because, particularly these large multi-unit complexes, people try to bury these problems under the surface but you can't do that forever.

He said while the investigation had continued to find more problem, it wasn't the only reason behind the rising repair costs.

"The building costs have gone up significantly and that's something we have to consider in the legal claim is that we're taking the claim now ... but some of those buildings won't be repaired for four or five years when we'll be in a different market."

"The main message is that people who are looking to buy into complexes they need to do a thorough due diligence not just of the unit they're looking at.

He said particularly people should be looking for a long-term maintenance plan and ensure it was done by a qualified building surveyor.

Earlier this week the National Party proposed a law reform which would strengthen that due-diligence.

Last week, Auckland Council said it had almost $320 million provisioned for leaky building claims in the next ten years.

It declined to comment on the St Lukes case while it's still before the courts.