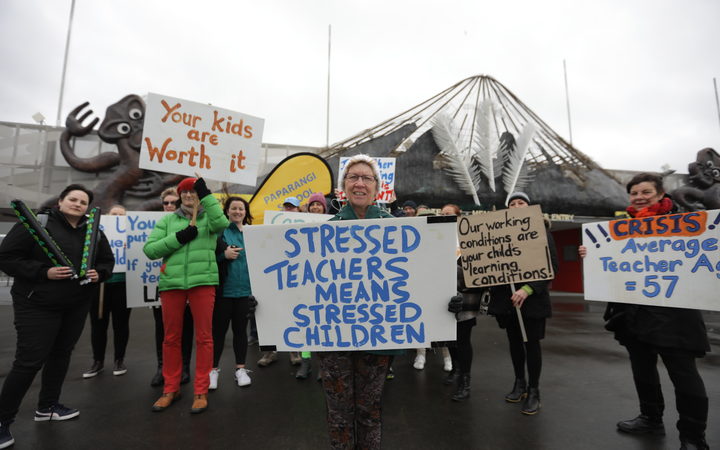 They will vote on further industrial action next month, the Educational Institute said.

"It is overwhelmingly a no," she said.

The union would consider its next steps at its annual conference in Rotorua next week and then make a recommendation, which members would vote on next month, Ms Stuart said.

Possible actions included a two-day strike, rolling strikes around the country, and "work to rule".

"There are a number of things our members have been looking at."

The union's members had rejected the ministry's offer because it did not address workload or special education needs, Ms Stuart said.

"The pay and the three-year term were also of concern."

Associate Education Minister Tracey Martin said she was disappointed and "slightly surprised" by the vote.

She said the ministry had made a good offer.

"This offer is a larger offer than all three offers put together that were accepted by the NZEI under the previous government," she said.

Ms Martin said the government had hoped to get past the collective agreement negotiations, so it could work with teachers to improve the education system.

"We understand their frustration, but it's disappointing because we really want to get back together and move forward," she said.

The government had been trying to address teachers' complaints about the teacher shortage and the need for more help for children with special needs, Ms Martin said.

"Not trying to take away from them in any way, shape or form, but we can only do so much in the time we've had."

Secretary for Education Iona Holstead said she was disappointed by the outcome of the vote.

The offer would have increased teachers' pay by of 9.3 precent over three years and was valued at $569 million over four years, Ms Holstead said.

"It is also disappointing because outside the bargaining process, the ministry is actively addressing the concerns teachers are raising about their working conditions."

Ms Holsted said the government's 2018 Budget included $20m over four years to increase teacher supply, $370m for 1500 new teacher places by 2021 and $59m for teacher aides. There was an extra $270m for learning support and last Friday the government had announced a plan to appoint learning support coordinators.

The offer followed days of negotiations and the first strike by primary teachers in 24 years last month.

The Education Ministry said 78 percent of primary and intermediate schools advised that they had closed.