Otago University's proctor has admitted his decision to enter an unlocked flat to confiscate drug paraphernalia was an error in judgment. 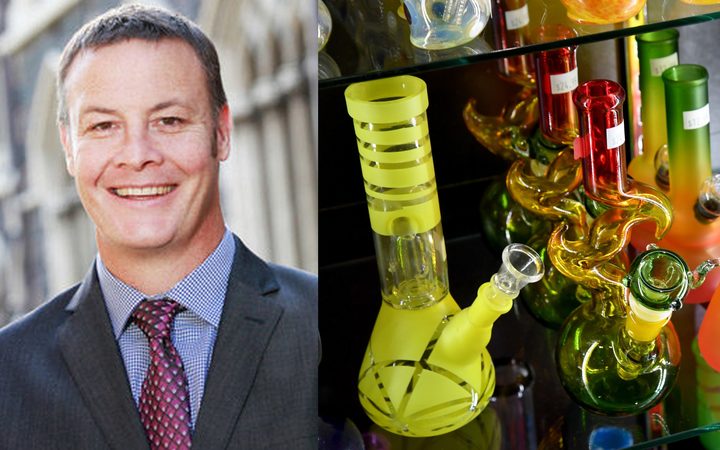 Dave Scott - a former police officer - has been criticised and may face legal action for entering the flat after seeing bongs sitting in plain sight.

The only person at home was asleep upstairs.

The flatmates thought they were the victims of a burglary until the proctor visited the next day.

While other students have come forward claiming similar incidents had occurred at other flats, Mr Scott said today it was a one-off mistake, which he would not repeat.

Asked if he accepted he broke the law, Mr Scott said that was not his intention.

"With the benefit of hindsight, that was wrong, and that's something I clearly need to change my process. I'm human, I've made an error here, an error in judgement.

"But my focus is on what's best for students. This institution is about students obtaining degrees and qualifications, it's not about them gaining convictions."

Mr Scott said he could not recall entering any other flats illegally, but confirmed he had removed bongs from picnic tables in backyards.

"I want to better at this job, I want to be better at what I do, so if that is the case, let them come forward, but I give an assurance that I have made a mistake on this occasion, and that mistake won't be repeated."

He said he was not above scrutiny and accepted legal action may be taken against him.

The decision to enter the flat on Leith Street about three weeks ago was made by him and he had never been given the authority to act in such a way by the vice-chancellor or any other senior staff within the university, he said.

He invited any others who had concerns about his actions in the past to come forward, but reiterated he did not recall any similar incidents.

'What the hell happened to them?'

A student from another flat - who spoke on the condition of anonymity - told RNZ Mr Scott had did something similar earlier this year.

"Back in probably May, we had the proctor come in through our backdoor and take two bongs from the table, and we came back and were like 'what the hell happened to them?'.

"We had no idea and then probably a day later, he called us into his office and on the table, they were sitting there, and he just said 'I think it's in your best interest if I destroy them'.

"Then obviously it's come to light that he's done it to a lot more people than us, which is just totally unacceptable. He's got no right."

The flatmates said they felt wronged but could not come forward with their story to the university or police.

"I think he should be held accountable for what he's done because it's just unacceptable," the student said.

No-one was home at the time Mr Scott entered the flat.

"He was walking past and he noticed the back door was open and his idea was that, he says that he was trying to close up the flat for us. That was his excuse," another flatmate said.

The group said they felt powerless in the situation and felt it was an abuse of authority.

"I've heard of four incidences where he's gone into flats and removed bongs, and then someone's mentioned to me another incident where he just entered their flat so it seems like there's a somewhat pervasive pattern of behaviour," Mr Smythe said.

On some of those occasions students were home at their flats, but on others they were again empty, he said.

It was why he was organising a protest against the proctor's actions on Friday and also why he had started an online petition calling for Mr Scott's resignation.

The petition had already garnered more than 1000 signatures.

Whakamana Cannabis Museum curator Abe Gray said he was taking a different approach and assessing the possibility of a private prosecution after being contacted by a wealthy cannabis reform supporter.

"It's understandable why the students would be intimidated to actually going to the police to report the burglary," he said.

"But because he kind of successfully intimidated them and the university is standing behind him - it's been embarrassing in the media - but there doesn't appear to be as though there's going be any actual consequences so this stoner contacted me and said I want to fund a legal fighting fund."

He was taking legal advice on how best to proceed.

The university's actions even drew the ire of their own staff.

"It's clear that the proctor has acted in a way that is unlawful. He doesn't have a legal right to enter into property or take things, even if he thinks it's for a good reason."

Yesterday the university stood behind Mr Scott's actions, but today backed down from that, saying he understood they could not be repeated and the institution recognised the importance of respecting students' rights.

A police spokesperson said as no complaint had been received about any of the matters, no investigation was underway.