The editor of Otago University's student magazine, Critic, says he's "really angry" copies of it were destroyed by the university. 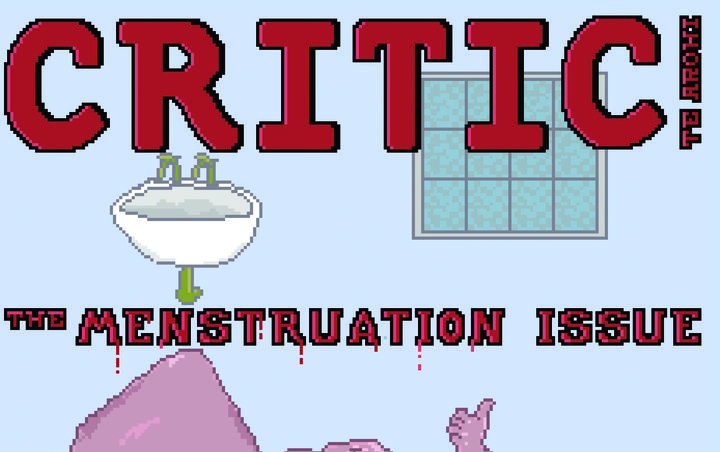 Yesterday, the university admitted the proctor had removed the magazines from the university because it had been removed from stands in public places such as the hospital and the library over the image on the cover.

The cover depicts a pixel-style cartoon of a naked person with their legs spread, menstruating.

Critic editor Joel McManus said the magazines were distributed Sunday night and received a lot of positive feedback from students on Monday. Later that day he saw the magazines stands around campus were all empty - initially thinking they were picked up due to popularity.

"Then I realised every stand on campus was empty and we knew that someone had come through and cleared the whole lot."

Mr McManus asked security, Campus Watch, to view CCTV footage to find out who took the magazines. By late yesterday he was contacted by the university and told the magazines were removed by Campus Watch at its request.

The idea for the issue about menstruation came from a women's-plus group on campus and meant to raise awareness of access to sanitary bins for trans students, Mr McManus said.

"Our team worked really hard putting the issue together and it's an issue we're incredibly proud of.

"It's a cover that is challenging, but it definitely got people's attention ... so it was a real shame when, essentially, our readers haven't had the chance to read it."

Mr McManus told Morning Report he was "disappointed and frankly really angry" by the magazine's removal.

"To hear that the university not only didn't come to us but destroyed the magazine in secret was quite hurtful."

He said the issue was not supposed to be distributed to off-campus sites such as the library or hospital and he collected them immediately.

"Normally, when we do objectionable issues we try to only distribute on campus," he said.

However, he said it was wrong for the copies to be removed from campus.

"I don't think [the cover] is so offensive that people on a university campus can't handle it," he said.

However, he said publicity over the incident meant people had been reading the magazine online in "numbers we haven't seen ever".

In a statement, a university spokesperson said it had been informed by the Dunedin Hospital and the Dunedin Public Library, both asking for the magazines to be removed from their foyers.

Dave Scott, the University proctor, then decided that the rest of the magazines needed to be removed from everywhere else.

"The proctor understood that the reason copies of this week's issue had been removed from public places, was that the cover was objectionable to many people, including children who potentially might be exposed to it."

About 500 magazines ended up in a skip bin on campus where they cannot be recovered.

The university said this was "regrettable".

The University said Mr Scott now believed the decision to bin the magazines was a mistake, and it was regrettable the magazines were then put in a skip where they could not be recovered.

He said the actions were never intended as censorship.

The university's communications spokesperson said a positive meeting took place between Critic editor Joel McManus and the proctor, in which the proctor gave his unreserved apology for removal of the copies of the magazine.

The Critic staff said they have accepted the apology, and have suggested to the university that it could make a donation of free sanitary products as a positive way to move forward.

Several copies of the magazine were now on sale on the website TradeMe, one with a 'buy now' price of $100.

"It seems alarming to me that the university, which has a statutory role as a critic and conscience of society, has decided to interpret that as being a moral arbiter or kind of Sunday school teacher for the adults who go there.

"It's not really up to the university to decide what students should be or shouldn't be reading."

The university said it had no official view on the content of the magazine, but it was aware staff members and the public thought the cover was degrading to women.

In a statement, the chief censor's office said on first viewing the cover seemed offensive rather than legally objectionable.

"It doesn't hit our subject matter gateway criteria (sex, horror, crime, cruelty, or violence) and while the image does depict an explicit view of female genitalia, the image is not sexualised, nor is it particularly degrading or dehumanising.

"Generally speaking, cartoon or animated imagery does increase the psychological distance between the viewer and the publication.

"However, all films, videos and publications are classified using the same process, so the medium itself is not as important as the content and context."

* A copy of the magazine can still be viewed on the Critic website.