Department of Conservation staff are facing a torrent of online threats and abuse following a recent spike in anti-1080 protests. 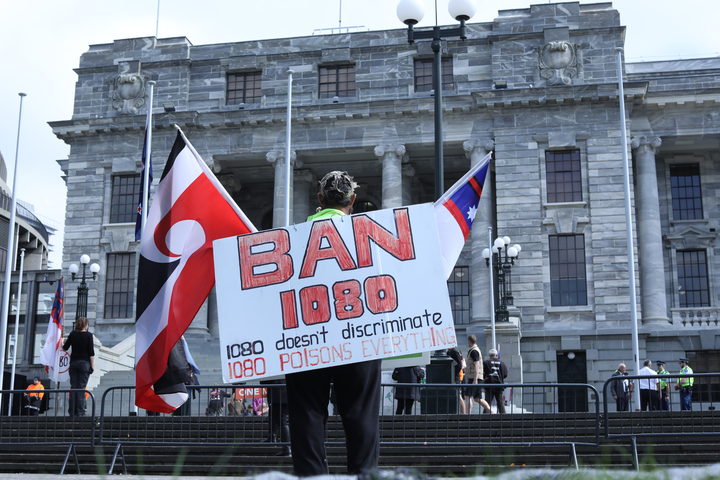 The escalation is being put down to people being captured by fake news spread on social media and has forced DOC to seek advice from Netsafe.

Just last week anti-1080 activists put dead birds, including kererū and weka on the steps of Parliament, claiming they were poisoned by the toxin.

After police were called in to investigate if the birds had in fact been bludgeoned, one of the protesters admitted some were actually road kill.

There is also the picture of dead kiwi doing the rounds on social media with a claim they had fallen victim to the poison.

DOC's threatened species ambassador Nicola Toki said those kiwi were either killed by dogs or cars.

She believes many people opposed to 1080 are joining the bandwagon without fully understanding what it is, and do not know about the decades of science behind its use.

This is having a consequence for frontline DOC staff, Mrs Toki said incidents of threats and abuse in August were significantly higher than usual.

"We had eight incidents in just one month alone where staff were physically confronted, abused or harassed and then we had seven abusive phone calls and emails"

She said in addition to that there were countless harassment threats and abuse via social media which were followed up with Netsafe and the police.

Mrs Toki told Morning Report a large proportion of New Zealanders genuinely cared about native wildlife and were interested in how pests were controlled using 1080.

DOC was doing its best to bring them the facts but when they were being bombarded by an "irresponsible avalanche of fake news, it's very difficult for the ordinary average New Zealander to get a real understanding of what's at play" she said.

In recent months anti-1080 groups have been spamming live news feeds of major organisations in a bid to get more attention on the subject, which has succeeded.

Lawyer Sue Grey represents protesters who have won a temporary court injunction against a poison drop in the Hunua Ranges.

Last November a video of her explaining how to get more media traction on 1080 was uploaded to YouTube, her advice included jumping in on news stories with 1080 comments even if the story had nothing to do with the toxin.

Mrs Toki said she had heard it all when it comes to fake news on 1080, from the Illuminati to Agenda 21.

"The theories are endless, none of them have any factual basis whatsoever and what's at stake is our precious native wildlife, which we just can't afford to lose."

Nick Smith held both the Conservation and Environment portfolios under the previous government in which time 1080 use was expanded from about 100,000 hectares a year to more than 800,000 hectares.

He said his government spent over $5 million looking at alternatives, but 1080 came out as the safest and best tool.

He said the activity was ramping up and on current projections someone would get hurt, he believes untrue claims and misinformation are feeding a fringe conspiracy group.

"With social media sites people are able to get a real rage and a conspiracy theory and think that there is the majority of New Zealanders are opposed to the use of the poison."

Dr Smith said the fact that the Ban 1080 political party only managed 0.1 percent of the vote at last year's general election and had de-registered showed how little support the movement had.

The current Conservation Minister, Eugenie Sage, said the huge predator free movement across the country showed the anti-1080 group had lost people's hearts and minds, and they were having an extreme reaction.

"We've had previously things like wheel nuts on vehicles being loosened causing a real risk to staff ... they need to be able to get on with the job without being intimidated and abused."

DOC is monitoring the anti-1080 activity and work is going on to ensure the safety of frontline staff and contractors.