A Ban 1080 activist has denied killing any of the native birds that were scattered across Parliament's steps by children in a protest over the use of the pesticide. 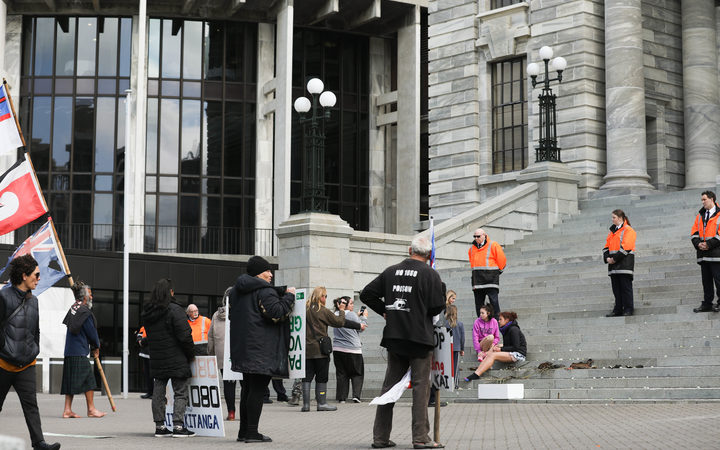 Protestors advanced beyond the barricade towards Parliament House to throw green imitation 1080 pellets at its doors and placed dead birds on the steps. Photo: VNP / Daniela Maoate-Cox

Parliament's Speaker Trevor Mallard yesterday revealed five native birds were among those placed on the precinct - including two kererū which he said appeared to have been bludgeoned to death.

He has laid a complaint with the police and the Department of Conservation (DOC). It is illegal to kill or possess native wildlife.

One of the protest's leaders Alan Gurden told RNZ none of the creatures had been harmed by the protesters.

"They were dead creatures.... we're not the sort of people to go round killing birds to make a point."

The quail and weka were roadkill, but the other birds and mice had been collected from a 1080 drop-zone, he said.

"These animals were all killed from various methods but it certainly was not at the hand of us.... It was an act of theatre designed to show New Zealand what we put up with on the frontline."

He said the carcasses had been given to one of his friends to store after they were collected from drop-zones or from the roadside.

"I'm not going to divulge my source, but someone else brought those to the scene. They were laid on the steps by the children," Mr Gurden said.

"So technically I have never owned, or had in my possession, any native birds."

Mr Gurden refused to name his friend who stored the birds, but said there was "no way" he would have killed them.

"I've known him for quite a while. He's on the same cause as me and he has the same kaupapa as me," he said.

"There's no way he'd go out and kill birds to prove a point."

Mr Gurden said he had not been contacted by the police or DOC. In a statement, police said inquiries were ongoing.

Anti-1080 activists wielding placards and loudspeakers marched to Parliament over the weekend demanding an end to the use of the poison.

Forest and Bird's advocacy manager Kevin Hackwell told RNZ the actions of the protesters had been concerning and disappointing.

"They got children to put these birds on the steps of parliament. It is illegal to not only kill native wildlife, but to possess it, and so bringing it up from the West Coast as he claims, having it in freezers as he claims; all that was illegal activity, and then of course to claim that they were killed by 1080 is something we see regularly.

"The 1080 protesters want to go the heart of the reason why we use 1080... because we need it to kill the predators like stoats that are killing our wildlife in the thousands every night."

He admitted that there could be 1080 in the birds' systems and said it was important that these were tested for the toxin.

A vast array of conservation and farming organisations support the use of 1080, describing it is an effective pest control tool.

They include DOC, the Environmental Protection Authority, the independent Parliamentary Commissioner for the Environment, and lobby groups like Federated Farmers and Forest and Bird.