Conservationists are elated at the prospect of a long-awaited 1080 drop on Northland's imperilled Russell State Forest, but others in the community are feeling nervous. 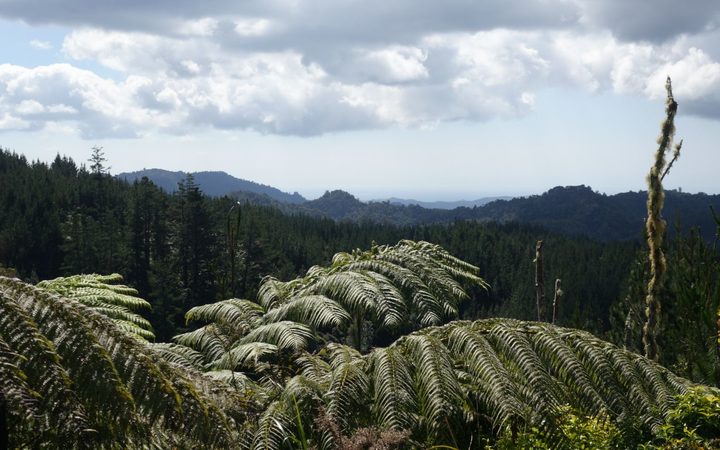 DOC contractors have been dropping non-toxic bait over the forest this week to get pests used to the cereal pellets.

Forest and Bird's Northland advocate Dean Baigent-Mercer was smiling from ear to ear when RNZ caught up with him, high in the Puhipuhi hills on Wednesday.

It was a sight he'd wondered if he'd ever see: one he said signalled a last-minute reprieve for a condemned forest.

Overhead, two choppers clattered back and forth, swinging green bait buckets beneath them, while ground staff tracked their progress by GPS from a laptop in the back of a ute.

"This is step one: the pre-feed to teach the rats and possums to eat the baits, then in a few days they'll get the poison ones and hopefully we'll knock them down," he said.

Dean Baigent-Mercer's campaign to save the ngahere began in earnest three years ago when he released graphic drone footage of the grey and dying canopy.

The video went viral and the long process of securing funding and community buy-in began.

When a forest this big and rugged was this close to death, a 1080 drop was the only practical way to pull it back from the brink, Mr Baigent-Mercer said. 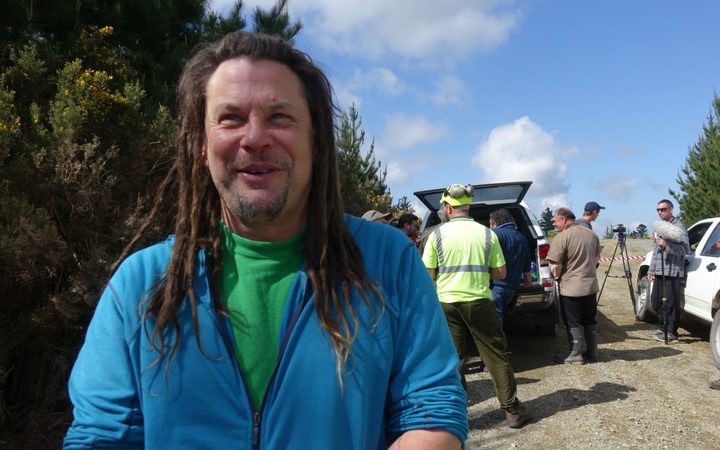 "We already knew that between 1979 and 1993, 80 percent of the kereru or kukupa as they're called up here, had disappeared from this forest so it's been crying out for help for such a long time."

Nine marae surround the Russell State Forest, and over the past 18 months, the hapu involved have thrashed out a 20 year plan to restore it to health.

When kaumatua Kara George was a boy it teemed with life.

"That matauranga (specialist knowledge) is not used now because we can't use the forest the way we used to and we older ones need to pass it on before we go. "

DOC staff who spent a week in Russell forest monitoring pest numbers in the lead-up to the 1080 drop, heard one tui, and one grey warbler in that time.

But they saw lots of pigs, and residual trap catches, used to gauge possum numbers, were at an unheard of 100 percent. For rats, it was 80 percent.

Kara George said anti-1080 sentiment stopped a poison drop on the forest 20 years ago, and even now it had not been easy convincing people that drastic action was needed.

"They feel they need the pigs left in the forest so they can go chase them so I have said 'Are you pig-farming or are we saving a forest?' And then they want the ranger work, which they think could be a drawn-out possum operation so I have said 'Well, are you possum-farming? Because the possums will just catch you up.'"

Some whanau were worried about the risk to dogs from poisoned possum carcasses floating downstream, hapu members said.

'Aunty' Thelma Connor said what worried a lot of people was the prospect of 1080 pellets washing into waterways.

"We had a meeting with DOC, Ngāti Hau did, and we reluctantly had to say yes to them. As long as we didn't have to deliver the 1080; they have to take responsibility if anything happens in the future," she said.

But DOC and NIWA say in years of monitoring, 1080 has never been found in drinking water and scientists have only ever found minute traces, briefly, in a stream.

Mr Baigent-Mercer said despite the recent clamour of protest about 1080 he had no concerns about the toxin, which was bio-degradable

"I've used 1080 myself and I found it really hard to use because as soon as it comes into contact with water it starts to lose toxicity. So you really need three clear days and nights for those animals to eat the baits and get it into them, " he said.

Dr Belinda Cridge who lectures in toxicology at Otago University says the 1080 toxin fluoroacetate was found in nature, in some plants.

In soil or water it broke down into fluoride and glycolic acid, which was not unlike vinegar, she said.

"The 1080 molecule is toxic when the fluoride molecule is attached to what we call the carbon structure. Once you break that apart, it's not got the power to do any damage anymore."

Dr Cridge said she would feel quite comfortable for her family to drink from a stream after a 1080 drop.

"It would take large amounts of bait going into a stream to be even detectable and in four to eight hours it would all be gone anyway," she said.

DOC said operators were maintaining buffer zones around waterways and the coastline.

It expected the 1080 drop over Russell forest to go ahead sometime in the next few days - weather permitting.

The Northland Regional Council said private landowners around the forest had been largely supportive of the drop, and some had asked for tracts of bush on their farms to be treated at the same time.

The surrounding farmlands would be part of the ongoing trapping operations to prevent re-invasion of the forest, a council spokesman said.