A Dargaville vet has told Northland farmers what the government refuses to reveal: the location of the farm confirmed to be infected with mycoplasma bovis. 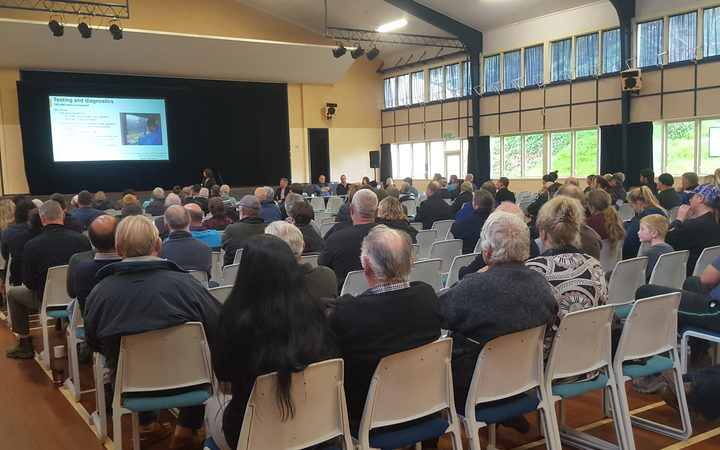 Biosecurity officials hosted a meeting of more than 100 farmers in Dargaville today, after confirming the first case of the cattle disease in the region last month.

The Ministry for Primary Industries (MPI) has a policy not to publicly identify infected farms to protect the privacy of already-stressed farmers.

It says the neighbours of infected farms are informed; and no one else is at risk because the farms are in lockdown from the moment it's suspected they may have been exposed.

But Brian Lowe - whose colleagues at Dargaville Vets Centre have been working with the affected Northland farm - spoke out today to put an end to what he said had been damaging speculation.

"There were a lot of rumours going around about who it is, who it could be; there are other farmers being pointed at...around Dargaville, Pouto - farmers everywhere that (people were saying) 'they're the positive ones' . All I've done is pointed out what everyone knows to stop the rumours," he said.

Mr Lowe waited until the end of the meeting then rose to address questions he said MPI had failed to answer.

To loud applause, he told the audience the infected Northland property was a Dargaville beef farm whose owner bought Friesian weaners from a Waikato stock agent in April, believing the calves came from the Waikato.

When the animals turned out to have theileria, a disease rarely seen in the Waikato, he became suspicious, Mr Lowe said.

Investigation proved the young bulls came from Canterbury, the region worst-affected by mycoplasma bovis, with nearly half the known cases.

The Dargaville farm was put into lockdown immediately and presented absolutely no risk of spreading the disease, the vet said.

"This farm has been suspect since April, since the animals arrived.

"The farmer is a very good farmer and he has ensured that no animal has come into contact with his on the boundary with other farms; there was strict bio-security even before it was known to be infected," Mr Lowe said.

MPI told RNZ the Canterbury farm that sold the calves was not known to be infected at the time of sale, but had since tested positive for mycoplasma bovis.

Emil Murphy of Biosecurity NZ said there might yet be consequences for the Waikato stock agent involved, but it was important not to blame the farmer who sold the calves.

"I've sat across the table from a bunch of farmers who've said 'Look we've done all we could, we did everything right and we've still ended up with this disease," he said.

In spite of that, MPI was making good progress towards its goal of eradicating bovis within the next couple of years, Mr Murphy said.

So far 67 properties have been confirmed as infected, but 30 of them have now been cleared.

The cattle cull now stands at 37,524 animals and by last week farmers had been paid compensation of $19.1m.

Those numbers were expected to rise as more properties were tested in the coming months, Mr Murphy said .

"We've just started the spring bulk-milk surveillance testing; that's starting about a month after each region starts supplying and we expect a few infected farms to come through that we hadn't seen yet, but we are still making good progress."

It was reassuring that in every case, the disease had been traced back to stock movements from infected farms, and it was not popping up at random, Mr Murphy said.

Only a tiny fraction of farms around the country were infected and farmers buying in stock should assess risk based on the seller's stock history, not by the region it came from, he said.

However Brian Lowe advised Northland farms to buy local, to be safe.

"There are truck-and-trailer loads of Friesian bulls coming into Northland every day, and one beef farmer told me you can buy Canterbury bulls for up to $100 less than you'll pay for a local animal," he said.

"That particular farmer decided to save money and accept the risk. That is a huge risk, and a risk for the community," Mr Lowe said.

While Northland has only one farm where mycoplasma bovis has been confirmed, MPI is now testing eight properties which might have been exposed to the disease.

However the Ministry said about 80 percent of the farms on watch, or in its terms, under 'Notice of Direction', test negative and the notice is lifted.