A large slip has closed State Highway 2 west of Ōpōtiki as wintry weather causes disruptions across the country.

Diversions are in place on Paerata Ridge and Verrall roads.

Police said there are reports the slip is still moving and it is unclear when the clean-up will begin.

Contractors and police are at the scene.

State Highway 2 south of Napier has been closed because of a crash and emergency services are directing traffic.

The lower and eastern North Island will have continuous high-impact weather this week.

Rainfall heavy enough to cause some flooding & slips.

MetService is forecasting severe gale southerlies for Wellington and the Marlborough Sounds this morning. 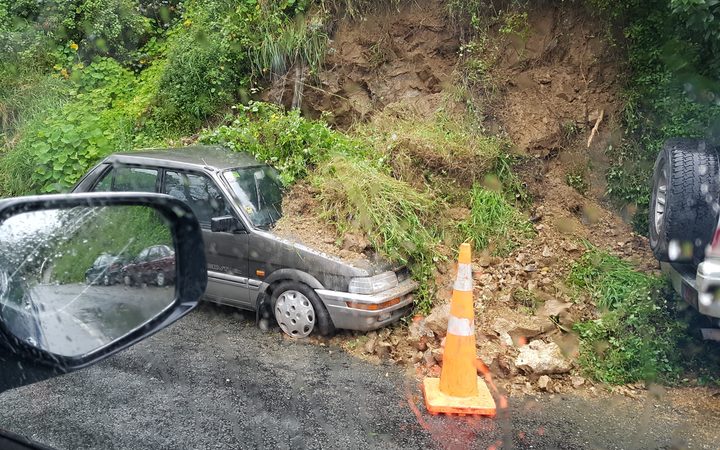 A car caught under a slip in Wellington yesterday Photo: Supplied

Heavy rain is expected for Wairarapa, the Tararua District and parts of the capital.

The wind could reach speeds of 120 kilometres per hour, while the heavy rain may cause rivers to rise rapidly and cause flooding.

Detours are in place in the central North Island because snow and ice has closed Desert Road, adding an extra 40 minutes to journey times.

The Interislander ferry sailing to Wellington at 9.05am has been cancelled and the capital's inner harbour ferries have also been cancelled.