South Island ferry passengers and motorists are advised to be cautious as snowfall and severe weather continue to batter the country. 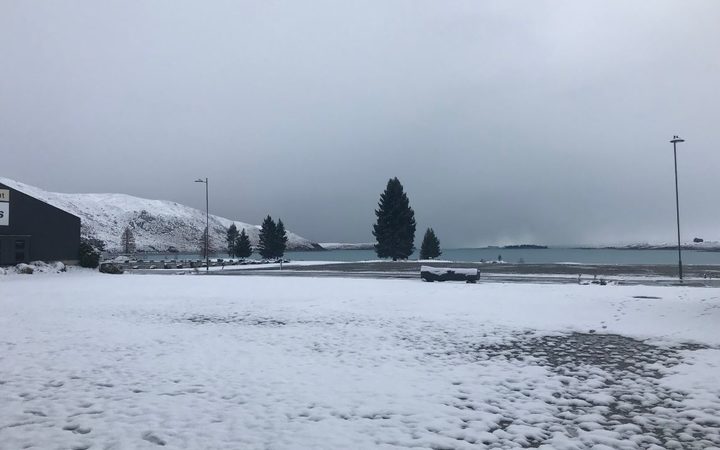 In a bleak start to the week, wind, rain and snow has been hitting much of the country.

He said, ironically, the 25cm of snow was one of the best dumpings they have had all season.

A road snowfall warning has been issued for State Highway 1 via Desert Road with brief snow showers expected from 8pm to tomorrow morning.

Snow is also expected to fall above 500m on Lewis Pass (State Highway 7) until 10pm.

A severe weather forecast has also prompted KiwiRail to bar passengers from a ferry crossing to Wellington tonight.

As a precaution, the ferry will only be carrying freight when it leaves Picton at 6.45pm.

In a statement, KiwiRail said it was aware of the forecasts of severe weather in the Cook Strait and was monitoring the situation.

The company also informed customers of the possibility some Interislander trips may need to be cancelled because of the weather.

These photos were taken this morning at NIWA's office in Lake Tekapo where a few cm of snow fell last night! pic.twitter.com/ulQR4h7SZZ

Persistent and heavy rain fall is expected to continue in Wellington and Wairarapa south of Martinborough, especially about the Remutaka and Aorangi ranges, until tomorrow morning.

The area is operating under a stop-go traffic control.

The Transport Agency is advising people to pass with care and to expect some delays.

UPDATE 11:25AM
The SH58 #slip is now under STOP/GO control. Please expect some delays while travelling in the area. ^HJ

Extra care is needed for motorcyclists and high sided vehicles on State Highway 1 Waitati to Pine Hill, due to strong winds.

In Wellington and the Marlborough Sounds, severe gales are expected to reach 120km/h from this evening.

Heavy winds are expected to ease around the Christchurch area and will instead move north this afternoon.

The bad weather is slow moving and is expecting to linger for much of this week.

The wintery blast heading up the country has caused some challenge for sheep farmers in the middle of lambing.

A bitterly cold southerly has been making its way through Canterbury and the bad weather now has its sights set on Marlborough and Wellington.

Metservice said as well as the wind, there had been snowfall on some of the South Island's alpine passes.

It said as the low moved up the country, it would stall off the East Coast of the North Island, with rain likely to persist there for several days.

But he said for the bad weather to hit right in the middle of lambing was challenging.

"Fortunately for me, I had a couple of sheltered blocks that I put stock into on Sunday and so far we don't seem to have had too many [lamb] casualties from the cold snap, I've been really lucky a actually," Mr Anderson said.

"The wind and the rain [overnight]... it was a howling wind and it wasn't pleasant to be out in that's for sure," he said.

In North Canterbury, a sheep farmer near Hawarden, Dan Hodgen said so far he had managed to get through the bad weather with only a few lamb fatalities.

Mr Hodgen said a bitterly cold wind had been the worst part of the spring storm, but he did not expect it to cause too many problems if it did not continue for long.

Beef and Lamb's North Island manager Matt Ward said the mild winter meant there was more feed on the ground to help stock get through a spring storm.

"We're better prepared this year than some [years] where you have really really cold winters and your grass covers actually go backwards ... you know farmers that are prone to these storms they do tend to prepare and make sure they've got feed on hand but certainly the mild winter has been an advantage this year," Mr Ward said.