The Selwyn District Council is seeking public feedback on new property rules to reduce fire risk, as it tries to curtail the number of annual wildfires it combats every summer. 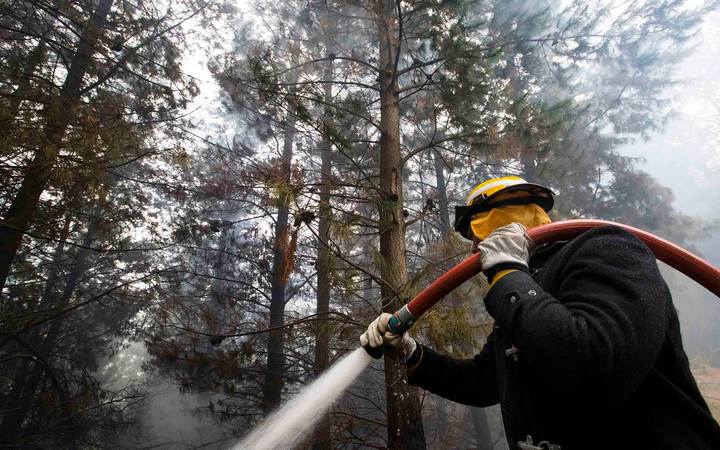 A firefighter hard at work in the Port Hills, Christchurch on 18 February 2017. Photo: Christchurch City Council

Bush and scrub wildfires usually start in December, fanned by Canterbury nor-westers, and can last through to February, stretching firefighting and council resources each year.

The proposed rules, which are currently out for consultation as part of the Council's District Plan Review, would determine where new properties can be built and where vegetation can be planted.

Residents are supportive, but feel extra changes are required to prevent more wildfires breaking out.

resident Ewing Cartwright was still repairing his home after it was engulfed by a wildfire, which started in a neighbour's paddock, in December last year.

Mr Cartwright said he was planning to change his garden so there was not a repeat.

"I'll probably do away with pines for the shelter belt. I'll just put some deer fencing up and may be some native trees that don't grow too high."

He said residents need to be informed.

"Probably the biggest factor is educating as to what are the causes of wildfires - and to minimise it. People doing inappropriate activities, likes of trimming trees with machines, mowing lawns and grass and making hay ... when there is a high risk."

He said more wildfires are happening because people are building their homes in rural areas.

"Generally in New Zealand, most of our fires are caused by humans. You put people out there in [rural areas], we're going to have more ignition sources."

Richard McNamara said wildfires were always going to happen, but changes had to be made to limit them.

He said they can wreak havoc if they get out of control.

"Wildfires seem to be increasing in intensity in number globally - Europe, the US, Canada, Australia, and New Zealand have suffered some significant fires in recent years."

Selwyn District Council environmental services manager Tim Harris said staff looked at other countries, including Australia, to see how they deal with their own fire seasons.

Mr Harris said they were open to making more changes if required.

"We've had no provisions to date - and obviously, the Port Hills fires raised people's awareness of the issue."

The wildfire provisions in the proposed district plan will be made available for public consultation in 2020.

If no further changes are made, they're set to come into effect in 2022 - subject to any Environmental Court appeals.