Eight people have been charged in relation to killing of Mongrel Mob member Kevin Ratana in Whanganui last week. 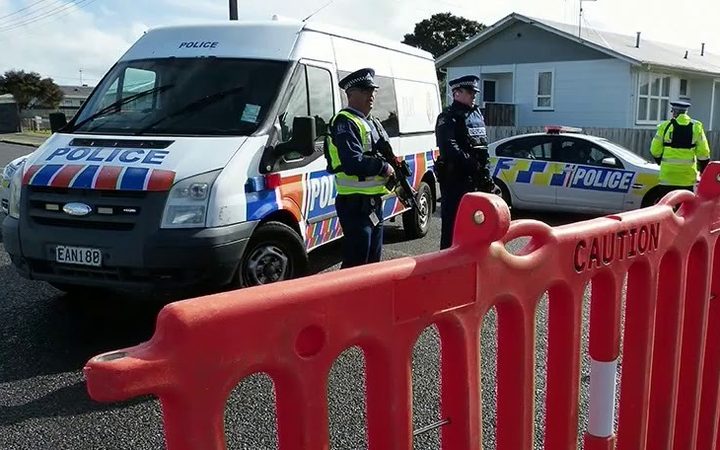 Police at the scene of a cordoned off area of Castlecliff, Whangaui, following the shooting on 21 August. Photo: RNZ / YouTube

Police say they found firearms and ammunition when they executed search warrants yesterday.

They say those arrested are facing various charges, including threatening to kill, unlawful possession of ammunition and participation in an organised crime group.

Police are continuing a homicide investigation and say they expect to lay further charges.

Hundreds of Mongrel Mob members attended the tangi for the 27-year-old yesterday at Parikino Marae on Whanganui River Road.

An increased number of armed police and the Eagle helicopter would be in the area again today, police said.

"We would rather the police weren't here, but given that we've had the event, we're very pleased the police are here in such strong numbers."

Ms Duncan said a gang meeting was taking place today, which was was a positive sign they also wanted a good outcome.

"If they're meeting today that means [they] have an intention of wanting to keep the peace themselves, which is very reassuring, so we don't expect this to go on too much longer."

In the meantime, she encouraged residents to go about their business as normal.

Sociologist Jarrod Gilbert, who wrote a book on New Zealand's gang history, said the negotiations showed that times have changed.

"The leadership is older in years, a bit more wiser, they know exactly what happens when you pick up the shotgun, it doesn't lead to good places for anybody, so they get around the table.

"This is exactly what's happening in Whanganui and that's a very positive thing," he said.

Dr Gilbert said it was still no easy feat to come to an agreement, as emotions would be high.