An environmental policy analyst is calling on the Conservation Minister Eugenie Sage to ban the buying and selling of ivory in New Zealand. 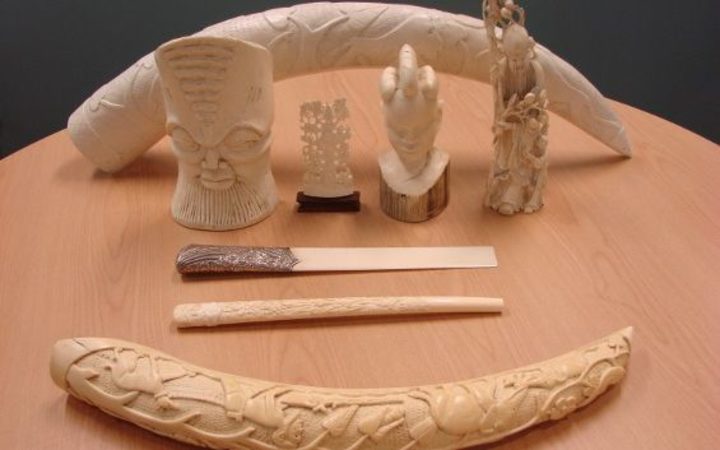 Eight items made from African elephant tusks that cost a New Zealander $12,000 in fines. Photo: Supplied / Department of Corrections

Fiona Gordon from the Jane Goodall Institute said New Zealand voted in favour of a global initiative to ban domestic ivory markets two years ago, but no steps have been taken since to shut it down.

"We voted in favour of an historic resolution to close all global domestic ivory markets where they're contributing to illegal trade and here we have in New Zealand examples of illegal trade going on and we have a completely unregulated market still so yeah, we're looking more and more like an outlier on this."

The Convention on International Trade in Endangered Species (CITES), to which New Zealand is a party, passed the resolution in 2016.

Ms Gordon said while it was illegal to import ivory without a special permit, it frequently passed through the border

"People are quite surprised to hear that New Zealand has a market for ivory, it's quite a lucrative trade.

"We're not talking about ivory-handled cutlery either, we're talking carvings, 100 percent ivory which fetches thousands of dollars each."

She said ivory that made its way illegally into New Zealand could be sold at places like auction houses, where there were no requirements for proof of origin or age of the product.

"So if you manage to get some ivory illegally you could sell it on the domestic market for no problem at all."

Today is World Elephant Day. Ms Gordon said an elephant dies every 20 minutes, and the ivory trade played a huge role in their deaths.

There are now less than 400,000 elephants remaining world-wide.

"The plight of elephants is fairly well documented.

"International trade for elephant ivory has essentially been banned but what we do have is nations who still have legal domestic markets and New Zealand is one of those nations.

"Where you have legal ivory markets you have huge risk for illegal products being laundered under the guise of legality and that's exactly what's happened here."

She said there had been about 100 seizures of ivory at the New Zealand border over the last ten years.

"That might not sound like a lot but every piece of ivory counts toward a dead elephant so I think we have to be mindful about that global response because at the moment New Zealand is part of the problem."

The Jane Goodall Institute is urging people to petition Ms Sage for a complete ban on the domestic ivory and rhino horn trade.